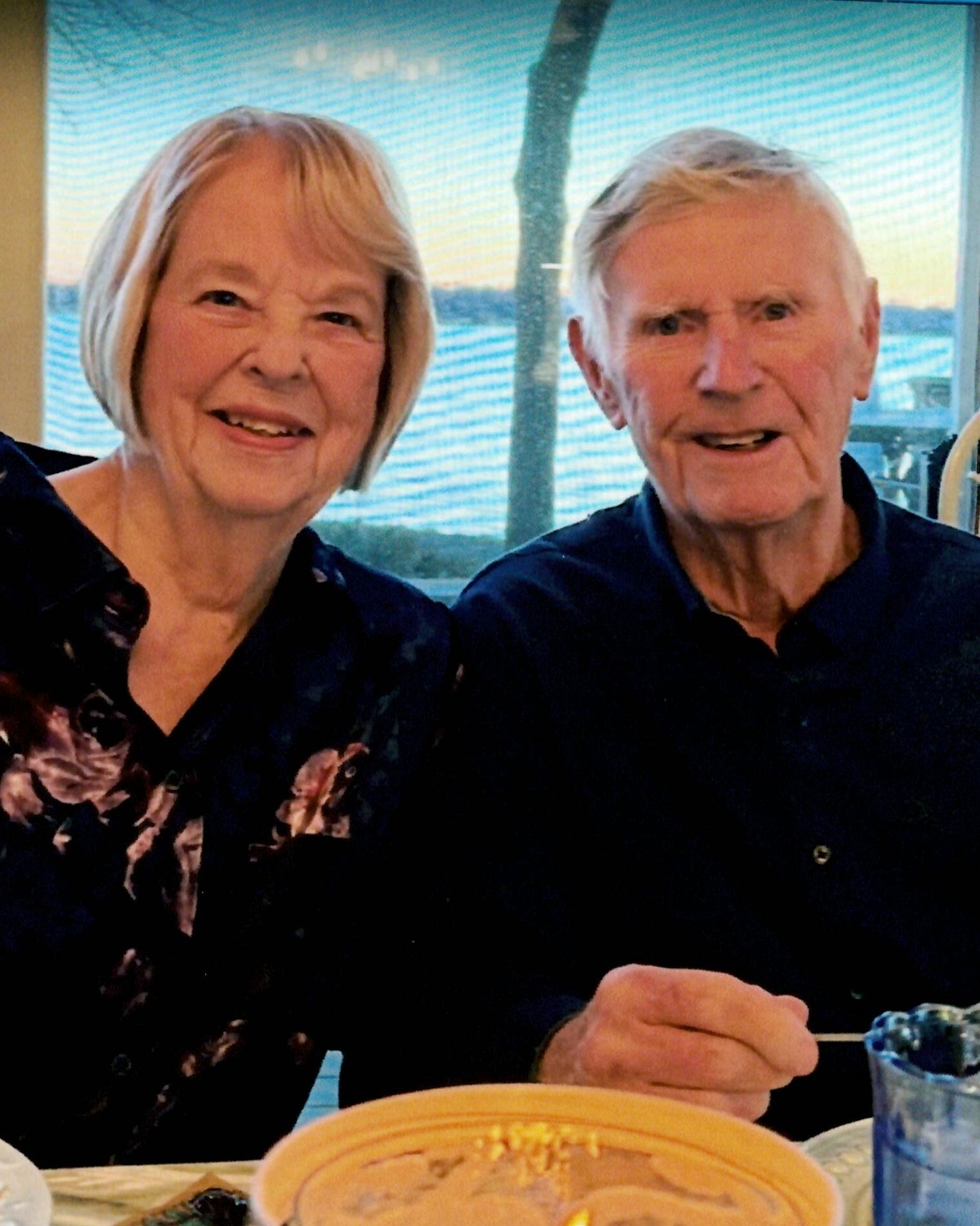 Marilyn J. (Lusk) Grover was born April 3, 1942, to Harold and Minerva (Flooding) Paulson in Rochester, MN, where she lived in the “little house that Dad built” and where she was raised with her two younger sisters Polly and Dawn. She married her high school sweetheart Richard “Dick” Lusk after they graduated from the new John Marshall High School in 1959 (Dick) and 1960 (Marilyn). She enjoyed working as a telephone operator in Rochester and Minneapolis while Dick attended Mankato State University and Brown Institute for radio broadcasting. Dick worked his way up in the Minnesota radio industry beginning in Albert Lea, then in Mankato for 6 years before moving to Marshall. For 18 years Marilyn and Dick worked side by side at KMHL in Marshall. Dick was the morning personality and manager, while Marilyn was the office manager, responsible for daily logs and bookkeeping. They then started radio station KIKV in Alexandria, where they moved in 1985, and worked until they sold the station and retired.

Dick and Marilyn raised two daughters Terri (Tim) Bush and Tammy (Kevin) VanOrsdel. An active foursome, the family did everything together, including camping, golfing, water skiing, snow skiing, snowmobiling, and vacationing. They also played lots and lots of card games, and never missed a Vikings game! The family’s favorite place to be was “the lake,” where they enjoyed fishing, all water sports, boat rides, sunsets, and bonfires. After many years of camping with Mankato friends, they enjoyed their Lake Ida cabin on weekends before moving to their lake home full time on Lake Darling in Alexandria in 1985. Marilyn was extremely creative and passionate in all that she did. She had a successful business sewing and selling draperies from her home while the girls were young. She also made clothes and doll clothes. Marilyn enjoyed painting and all sorts of crafting, especially making cards, jewelry and scrapbooking. At the holidays Marilyn loved making gifts for family and friends. A collector in a very big way, Marilyn collected many jars of antique marbles as well as antique dolls. Both are displayed in every room of her home, where the dolls are enjoying tea parties, riding rocking horses, swinging, etc. Marilyn also had a passion for shopping, often purchasing one of each color. She was an active member of the Alexandria community, including First Lutheran Church and the Alexandria Golf Club. She enjoyed time with her birthday and doll clubs, and always looked forward to seeing her Marshall friends. Marilyn also loved working in and growing her perennial garden. The most important thing to Marilyn was her family. Marilyn was famous for the birthday parties she gave her five grandchildren; everyone received a gift and enjoyed her jukebox dance parties!

Dick and Marilyn spent their winters during retirement enjoying the golf courses and beaches in their home in Venice, Florida, until Dick’s death in 1992. Marilyn met and married William “Bill” Grover November 28, 1994. The couple were set-up by their neighbors after each had lost their spouse. After building a new home together in Venice, Bill and Marilyn enjoyed golfing, neighborhood get-togethers, and many social events including many family visits. Serving as the social chairman for their community, Marilyn planned numerous events and adventures up and down the gulf coast. Bill and Marilyn were wonderful companions for 28 years.

Bill and Marilyn enjoyed their large combined family, spending summers in Alexandria and winters in Venice until they moved to Alexandria permanently in 2019. The two families combined nicely and became better acquainted when Bill’s family visited Alexandria. Bill and Marilyn passed away in a vehicle accident on Thanksgiving Day Nov. 24, 2022.

Marilyn was preceded in death by her husbands and her parents. Surviving Marilyn are her daughters Terri (Tim) Bush of Alexandria and Tammy (Kevin) VanOrsdel of Alexandria; grandchildren Emily (Jake) Juettner of Alexandria, David (Samantha Hogstad) Bush of Portland, OR, Zach (Stevie) VanOrsdel of Foley, MN, Heidi Bush of Chicago, IL, and Nic VanOrsdel of Minneapolis; sisters Paulette (Polly) (Layton) Raymond and Dawn (Daniel) Bell, all of Rochester, and many more friends and relatives.

William “Bill” Hinckley Grover was born March 23, 1931, in Gloucester, Massachusetts, the fifth child of six to Edward and Florence (Hinckley) Grover. He attended Gloucester High School, Class of 1950, where he met his future wife, Nancy Brennan.  They were married on April 5, 1953, and to this union they were blessed with five children, Cynthia, Cheryl, Cathleen, Christopher and Colleen.

Bill served in the U.S. Navy from 1951 through 1955. Upon returning to civilian life Bill earned an Associates Degree from Bentley College and worked for General Electric until his retirement in 1990.  Bill’s hobbies and interests included golf, following the Boston Red Sox, boating, fishing and tennis.

After 40 years of marriage and retiring to Venice, Florida in 1990, Nancy passed away in January 1993.  Bill met his second wife, Marilyn Lusk, a native of Minnesota, and they were married on November 27, 1993, in Cypress Gardens, Winter Haven, Florida.  Bill was welcomed by Marilyn’s extended family. Bill was active in the homeowner’s association and spent a considerable amount of time on the golf course and playing tennis and was also a member of the Alexandria Golf Club when residing in Alexandria MN during the summers. In 2017, the couple moved to Alexandria permanently.

A memorial service for William will be held in Gloucester, MA at a later date.

To order memorial trees or send flowers to the family in memory of William and Marilyn (Lusk) Grover, please visit our flower store.