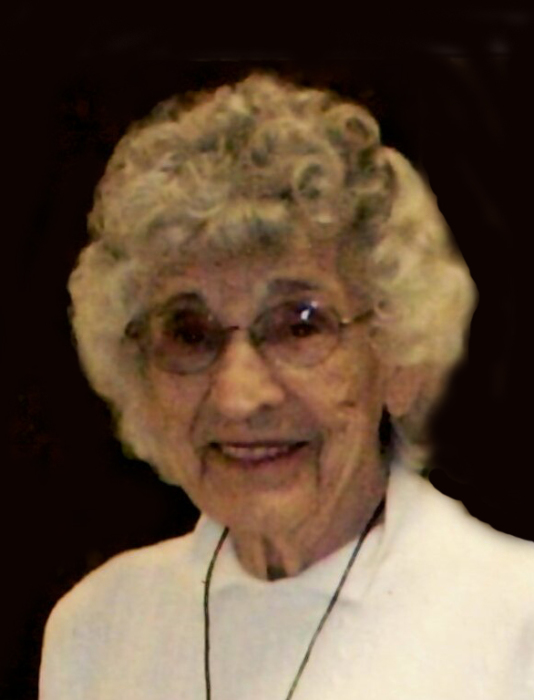 Veronica Ann Langner was born April 1, 1922 in Holdingford, MN, the daughter of John and Frances (Herman) Langner. She attended school in Holdingford. Following high school Veronica worked as a medical secretary for a doctor in Holdingford. She moved to the Twin Cities where she worked for Dr. Kamp as a housekeeper and nanny. She also worked at Old Dutch.

On October 28, 1941 Veronica was united in marriage to Lester Yell at Immaculate Conception Church in Minneapolis. Lester was in the service and Veronica moved with him as he was stationed in the southeast United States. During World War II Veronica worked in a bomb assembly factory and in a cigarette factory.

Following the war, Lester and Veronica made their home in St. Cloud, MN. They were blessed with five children. While raising her family Veronica did some work as a seamstress for friends and family.

In 1976, Lester and Veronica built their retirement home near Lake Jessie near Alexandria. Veronica and Lester loved fishing for sunfish on Lake Jessie. Veronica was an expert at crocheting; she made many different custom items for friends and family. Camping with her family was a favorite thing to her. She loved traveling with Lester, and they spent many winters in Donna, TX with their motorhome. They always looked forward to a Friday evening of fun and dancing at the VFW Club.

Veronica was a faithful member of her church. She was a member of the League of Mary and the Christian Mothers.

In 2016 Veronica moved to Windmill Ponds in Alexandria. Last February she moved to Sauk Centre to be closer to her daughter.

A Mass of Christian Burial will be held at 12 Noon, Tuesday, October 29, 2019, at the Church of St. Mary in Alexandria. Reverend Father Steve Binsfeld will be the celebrant. Entombment will follow in the church cemetery. Visitation will be from 4 to 6:30 PM Monday with a Prayer Service beginning at 4 PM at the Anderson Funeral Home in Alexandria. Additional visitation will be one hour prior to the service at church. Arrangements are with the Anderson Funeral Home and Crematory.

To order memorial trees or send flowers to the family in memory of Veronica Yell, please visit our flower store.
Open