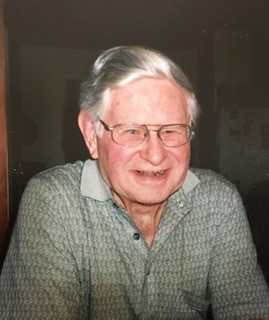 Vernon Arnold Olson was born on October 16, 1926, in LaGrande Township to Edwin and  Mabel (Severson) Olson.

He graduated from Barrett High School in 1945 and attended the Hanson Body School in Fargo, ND.

He served in the United States Army from June 1945 to January 1947: he was a Corporal stationed at lwo Jima. He married Ruby Pladson Schreiner on June 28, 1956, in Sisseton, SD.

Vernon owned his own roofing and siding business, with his son Randy working by his side until his death in 2001. He was a member of the American Legion, the auxiliary, and a member of the Alexandria Elks Lodge.

He enjoyed ice fishing, playing cards and playing bar bingo at the Elks.  His greatest enjoyment came from being at the Viking Speedway Racetrack. He was inducted into the Hall of Fame on July 20, 2019, marking 50 years of service at the racetrack.

A Memorial Service will be held at Anderson Funeral Home, Alexandria, MN on December 11, 2021, at 2:30 p.m. with a visitation one hour prior to the service. Interment will be at the Evergreen Cemetery in Alexandria.

To order memorial trees or send flowers to the family in memory of Vernon Olson, please visit our flower store.