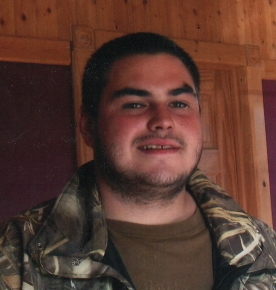 Tyler Scott Schmidtbauer was born on November 20, 1991, in Staples, Minnesota the son of Scott Schmidtbauer and Dawn Gorder.  Tyler was an adventurous spirit who loved the outdoors which was evident at a young age when he would take his sister Hailey and they would go and trap cray fish and minnows.  He had a great love of hunting and fishing and was nicknamed by family as “Daniel Boone”.  He shared this passion with his younger cousins. It was also time with his hunting dogs, Raven and Thor.  Tyler was good at cooking the game he caught which family and friends enjoyed.

Tyler also enjoyed time while living on is grandparents farm helping take care of animals and at the age of five he rode sheep in the Park Rapids Rodeo and won first place.   He will be remembered as a loving person who was known for his great laugh, smile and was a jokester.  He was also very protective of his family – especially his sister, Hailey.

Most important to Tyler was his daughter, Cydney.  He shared his love of the outdoors with her.  Enjoying walks in the woods tracking different animals.

He was preceded in death by his grandma, Pat Schmidtbauer; cousin, Kayden Hansen.

Funeral service will be held on Wednesday, March 6, 2019, 1:00 PM at the Anderson Funeral Home with visitation one hour prior to the service.

To order memorial trees or send flowers to the family in memory of Tyler Schmidtbauer, please visit our flower store.
Open