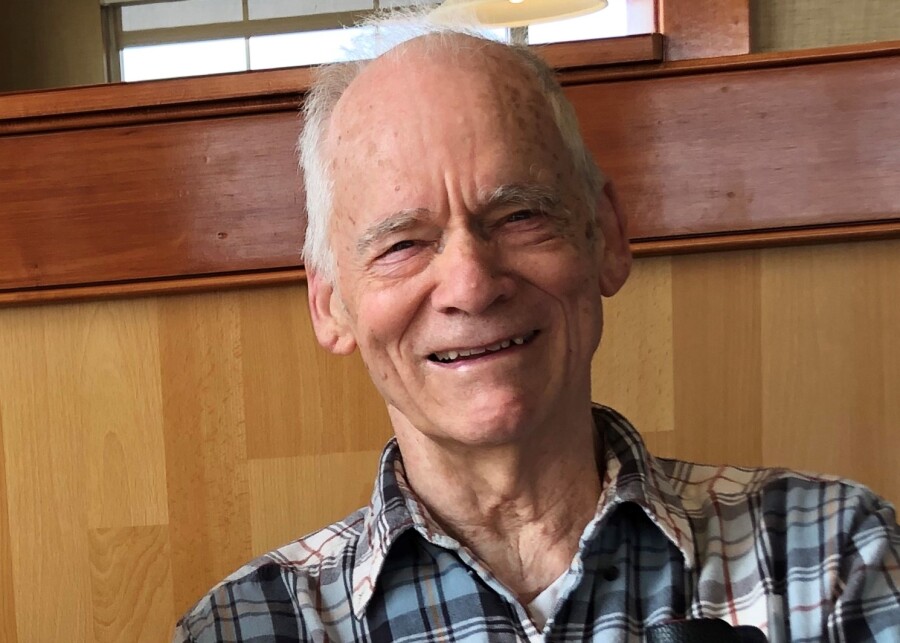 Our Dad was one of the kindest, most giving people you’d ever have the pleasure of meeting. Getting him out of church was a real chore. “Tom!” “Tom!” “Tom!” You’d look at our Mom and plead, “Can we please wait in the car?”

His one-liners are legend. They alternated but two of the regulars: “I’m cold/hot/hungry.” Dad: “Hi, I’m Tom. Nice to meet you.” “Nice to see you.” Dad: “Nice to be seen.” (Followed by a pulse check in his later years.)

He and Jerry Thompson (no relation, but as close as brothers) grew up together. We had no luck digging for stories, but we’re sure they got up to mischief. Jerry and Ellen and Mom and Dad were dear friends their entire lives. Their get-togethers were full of laughter, loud and long. (Much to our dismay if were at Jerry and Ellen’s house. “Can we go home now?”)

He met our Mom in the choir at St. Luke’s Lutheran Church in Minneapolis, and they married on Oct. 13, 1962. He was devoted to her and always treated her with respect. It was a shock to us that there was another way for parents to act. (Hearing other parents fight was frightening and sent one of us home crying.)

He was a proud veteran of the U.S. Navy. After active duty, he served for 25 years at the Naval Air Reserve base at the Minneapolis-St. Paul airport. After dementia set in, this is where he returned.

After years of hard work and long hours working in electronics at Honeywell, he retired and came into his own. He golfed and read every spy and espionage novel he could get his hands on. He and Mom were active at Calvary Lutheran and had a wide circle of friends (Roger and Margaret Granlund were especially dear). They traveled all over the world, usually with Mom’s brother Dave and his wife Ruth.

He could fix anything. Need a new cord on something? Done. He was the ultimate handyman, and his handprint is on all our houses – sheetrocking, landscaping, painting. The list goes on.

Dad was easygoing except if we mouthed off or mistreated our Mom, used bad manners, or acted up in church. (This included sneaking in candy. He’d give you “the look.” Ask the grandkids.) He was also a stickler about how to treat the flag, including how to fold it.

He is survived by his children Maria, Mike and Steve; daughters-in-law Beth and Lana; grandchildren – “If I knew they were this much fun I would have skipped the kids” – Tori, Cale, Katy, Kessa, Cohen, and great-grandson Henry (who has his mouth and smile); and many nieces and nephews.

We lost him to dementia before he died, but that doesn’t make us miss him less. That he didn’t know Mom died was a blessing. Now they’re back together, he’s not getting a word in edgewise but has access to a steady supply of lemon meringue pie.

We are grateful for the angels in Memory Care at Grand Arbor. He was happy and healthy in your care. You are all amazing. Sara – your music brought him such joy and peace. Shannon (Grand Arbor) and Deb (hospice) – we could never repay you for all you did for our Dad. You made his – and our – journey easier.

We love and miss you so much, Dad. Say Hi to everyone, including the dogs.

Due to COVID-19, Dad’s service was private.

If you are moved to donate in his memory: Lutheran World Relief (LWR) or the Calvary Lutheran Church Mission Quilters. (Our Mom was one of the Mission Quilters. Over the years, Dad hauled and transported many a box of quilts to LWR.)

To order memorial trees or send flowers to the family in memory of Thomas Thompson, please visit our flower store.