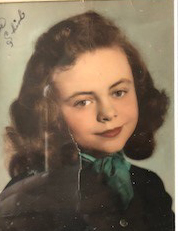 Shirley Marie Radke Altermatt was born December 19, 1932 to Robert and Meta Radke in New Ulm, Minnesota. She met her true love, Jerry Altermatt, on a Moonlight Skate at age 15, and married him at age 16. They had three children, Rhonda (Ronni), Terry, and Jill (Bean). They made their home in New Ulm until the fall of 1968 when they bought a small lake resort on Lake Ida – a dream that had been born while on the many camping trips they’d taken kids, cats and dogs in tow. They enjoyed life on the lake and eventually built a home there after selling the resort properties in the late 1970's.  Shirley then began working at the Douglas County Hospital, first in dietary – and later in Central Supply, where Shirley became known for not only her work ethic, but also for her sense of humor and fun. She enjoyed her “CSR buddies” and loved going to work, but retired early to care for Jerry, who’d had several surgeries for cancer.

She is remembered as a fun-loving, feisty, somewhat mischievous friend, mother, and grandmother, who made sure that she and Jerry made trips to Verndale, Colorado, Florida, Indiana, Utah, Nevada – and South Padre Island – wherever those children and grandkids might have landed at any given time.

Shirley’s health declined after the loss of Jerry in 2011 and she eventually made her home at Grand Arbor where she died on April 13, 2019 at the age of 86. She is survived by her three children, her daughter-in-law, Pearl Altermatt, grandsons, Jason (Kathy) Orlowski, Justin (Ann) Orlowski, Zachary Orlowski, and Aaron (Katherine) Orlowski, and Tony (Steph) Altermatt, and granddaughter, Tami Rae (Zach) Stroud, 6 great grandsons and 5 great granddaughters.

A Celebration of Shirley’s life will be held at Grand Arbor on Wednesday, April 17, 2019, 3:00 PM with visitation one hour prior.   Internment will be at a later date at the New Ulm City Cemetery. .

To order memorial trees or send flowers to the family in memory of Shirley Altermatt, please visit our flower store.
Open