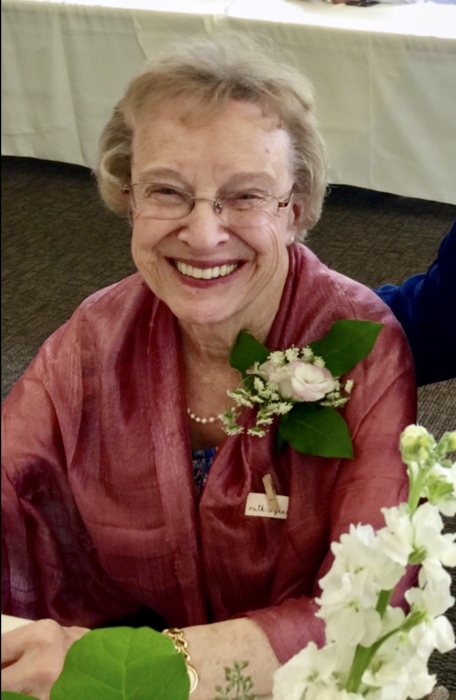 Ruth Lillian (Pedersen) Irgens was born on February 2, 1932, in Camrose, Alberta, Canada to her Danish immigrant parents, Richard and Anna (Rasmussen) Pedersen.  She was raised in Canada, where she excelled academically (skipping a grade and earning the prestigious Governor Generals Medal for academic achievement) while helping with her five brothers, Eric, Paul, Ralph, Carl, and Harold.  At 17, Ruth graduated from Camrose Lutheran College and moved to the US to continue her education, at the Lutheran Bible Institute in Minneapolis.  Following LBI, Ruth obtained her nursing degree from the Fairview Hospital School of Nursing and worked as a neo-natal nurse at Fairview.  During this time, she met and fell in love with a handsome Luther Seminary student, Arthur Anfinsen.

Art and Ruth married on August 26, 1956, and lived in Minneapolis, where they had their first son, Peter, while Art finished Seminary.  Soon thereafter, they moved to Valhalla Center, in northern Alberta, where Art served as pastor to a small country parish.  The difficult loss of their second son, John, born prematurely, was followed by joy when their daughter Mary was born.  In 1967, the family moved to Alexandria, where Art became Associate Pastor of First Lutheran Church.  In 1969, their family was completed through the special blessing of the adoption of their daughter Jana.  Sadly, in 1970, Art died of cancer and Ruth set about caring for their three children on her own.

In 1976, Ruth met a kind and charming widower, Dr. Larry Irgens, when she took a family of Vietnamese refugees to him for their dental care.  Courting ensued, and, on February 18, 1977, they were married and Ruth became Stepmother to Caroline, Stephen, David, and Teddy.  Ruth and Larry raised their seven children with determination, running from one concert and sporting event to the next, and Ruth prayed enthusiastically for each of them as they sought to find their place in the world.  A shared love of music, travel, their children and grandchildren, and each other enriched their marriage until Larry passed away from cancer, in 2000.

Ruth was long active in the community, serving in many roles at First Lutheran Church and on the Douglas County Welfare Board.  Over the years, she worked both at Larry’s dental office and at the Technical College, teaching nursing assistants.  Ruth loved music, literature, travel and gardening.  Most of all she loved her family and friends, whom she enjoyed hosting on holidays and during summers at the family cottage on Maple Lake.  Ruth will be fondly remembered for her kind spirit and gentle nature, her no-nonsense manner and steadfast faithfulness, and her quiet determination to lead a godly life.  She will be greatly missed by all who loved her.

To order memorial trees or send flowers to the family in memory of Ruth Irgens, please visit our flower store.
Open