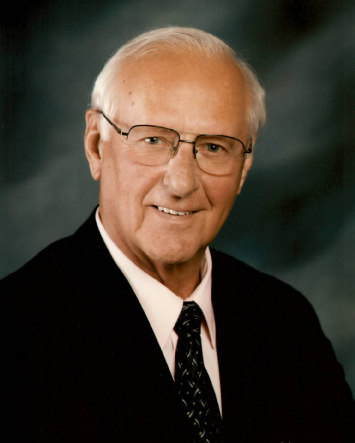 Robert (Bob) James Rader, was born December 20, 1931, in St. Cloud, Minnesota, the son of Matthew and Mary Rader. Bob grew up in St. Cloud and was graduated from Cathedral High School. He lettered in baseball, basketball, football, and bowling and was a member of State Championship teams in basketball and baseball. After graduation in 1949, Bob attended St. Cloud Teacher's College and continued his education until entering the US Army in January of 1951. While in service, he attended Camp Desert Rock in Nevada and participated in witnessing the atomic tests that were conducted there and became the CBR non-com officer for his Regiment. He continued his service as an instructor/cadre sergeant until his discharge in September of 1952. He then returned to St. Cloud State University to complete Bachelor Degrees in Social Science, History, and Business. He began his professional career in Battle Lake, MN, teaching Social Science and Business Education and coaching all sports. In 1958, Bob moved to Alexandria and taught 29 years at Jefferson High School. Bob married Yvonne (Vonnie) Egerman from St. Cloud in 1956. They were blessed with three children, David, Ann, and Janice.

In 1962, Bob received a Master of Science Degree in Education from St. Cloud State University. In the late 60's, he started the first law-related education course in Minnesota at the high school level entitled "Civil Liberties, Youth and the Law." As a result of this course, Bob started writing law curriculum and was first published by Justice Publications of California when he wrote the first criminal mock trial books for high school use. Subsequently, in 1980, Bob started Law Instructor Publications, an educational publishing company in Alexandria. He has written some 26 educational books and products which are widely distributed throughout the United States and Canada.

Bob was very involved in professional organizations at the local and state level. For some nineteen years, he served as a board member of the Minnesota Council for the Social Studies, as a board member for Project New Hope, as Secretary of the Alexandria Golf Club, as President of the Vikingland Barbershop Chorus, and as a member of the first school board at St. Mary's School. Bob was honored as Teacher of the Year in 1986 and inducted into the District 206 Educational Hall of Fame in 2009.

After teaching thirty-two years, Bob and Vonnie took early retirement. In 1995, they bought a residence in Surprise, Arizona, where they enjoyed many winter seasons. He remained active in singing "karaoke" at local clubs and sports bars.

A visitation will be held on Tuesday, March 12, from 4-7 PM at the Anderson Funeral Home in Alexandria.  Visitation will continue on Wednesday from 9:30-10:30 AM at St. Mary’s Catholic Church in Alexandria followed by a Mass of Christian Burial beginning at 10:30 AM.

Entombment will be at Assumption Cemetery in St. Cloud, MN.

On-line condolences may be left for the family at:

To order memorial trees or send flowers to the family in memory of Robert (Bob) Rader, please visit our flower store.
Open