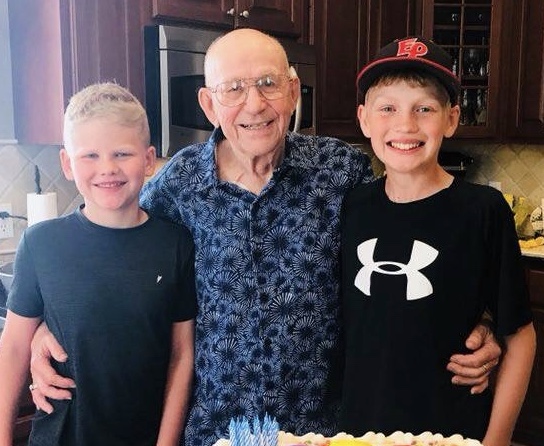 Due to weather concerns, the funeral for Robert Homan has been changed to Saturday, December 29, 2019 at 10:30 AM at Good Shepherd Lutheran Church in Alexandria.

On February 28, 1928, Robert (Bob) Dale Homan was born in Montevideo, Minnesota. He was the son of J Lyle and Irene (Kriesel) Homan. He was baptized in Montevideo and attended Montevideo high school and graduated in 1946. After high school he joined the Army and served overseas in Japan in the Occupation Force. He was an avid Minnesota Twins fan and a lover of all sports, especially watching his two grandsons play baseball, basketball and football.

Bob lost Renola to cancer just six weeks prior to their 50th wedding anniversary in September 2001. He later married Anna Greenquist of Brandon who also preceded him in death. He was close with Anna’s children and grandchildren also.

Bob died on Thursday, December 20, 2018, at his home in Alexandria at the age of 90 years. He is survived by his children Matthew Homan of Alexandria, and Hattie Homan-Syvrud and her former husband Steve Syvrud and their children Dawson and Davin of Eden Prairie, Minnesota, his brother William (Bill) and wife Barb of Montevideo, and several nieces and nephews. He was preceded in death by his wife Renola, parents, 2 sisters and 3 brothers.

To order memorial trees or send flowers to the family in memory of Robert Homan, please visit our flower store.
Open