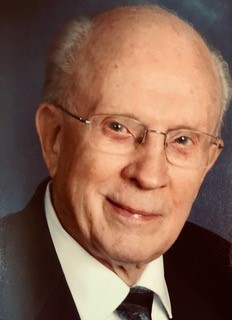 Rev. L. Jerome “Jerry” Anderson was born in Marshall County, the son of Leroy and Amanda Anderson, on August 20, 1929.  He was baptized and confirmed at Bethesda Lutheran Church in Strandquist, MN.  He graduated from Strandquist High School in 1947.

It was at Breckenridge in 1950 that he met a Kindergarten Teacher by the name of Ann Anderson.  After a courtship of three years, during that time he served in the Navy for 2 years, they were united in marriage at Bethel Lutheran Church in Hoffman, MN.

Four Children were born in the Anderson union.  One daughter Marne died in infancy.  Surviving are his wife Ann of 67 years, son Lon and Deb and their three children; son Jeremy, daughter Danielle and husband Patrick, daughters Lydia and Hallie, and daughter Nicole; daughter Kim and Tom and their four children; son Kai and wife Jazman, daughter Adeline, son Leif, daughter Leigh and husband Greg Gladden, daughter Presley, and son Dane; daughter Jana.  Lon and Jana have been their care givers for the past 10 years.

Jerry is preceded in death by Parents Leroy and Amanda, daughter Marne Marie and daughter-in-law Becky and brother’s Ardis and Eugene.

Jerry deeply loved his wife and their children and their families.  He loved the Lord and the Church of Jesus Christ, particularly the churches he served in Minnesota especially his call to found Advent Lutheran Church which he developed and organized, serving as Senior Pastor for 28 years.  During his tenure at Advent Pastor Jerry saw the need for a community assistance program which he founded.  C.R.O.S.S. was organized in 1974 and continues to serve the Northwest Community of the Twin Cities currently in Rogers, MN.

Memorials from the funeral go to C.R.O.S.S. in Rogers, MN or Bethel Cemetery in Hoffman, MN

To order memorial trees or send flowers to the family in memory of Reverend L. Jerome Anderson, please visit our flower store.