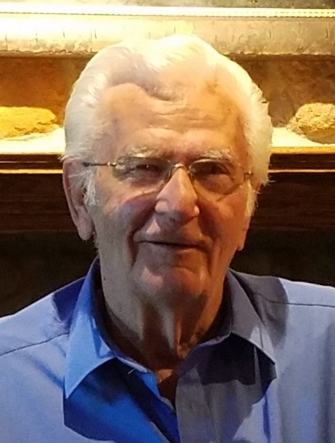 Raymond Henry Anderson (90), son of Alfred and Clara (Schulke) Anderson, was born in rural Carlos Township, July 10, 1931, the third of four children.   He was baptized and confirmed at Calvary Lutheran Church in Alexandria.    He grew up on a farm in southwest Miltona Township, near the Minnesouri Club, and he graduated in 1949 from Central High in Alexandria.   He honorably served in the US Navy from 1950 -1954 during the Korean War aboard a destroyer named the USS Beatty.     During a visit home on leave, he met and later married Bonnie Moske in June 1956.     They made their home on 84th Street in Kenosha Wisconsin where Raymond worked thirty years for the American Brass as a metal finisher.      He earned a degree in 1972 at Gateway Technical Institute in machine tooling.    Three children were born and raised in Kenosha, and the family were members of St. Mary’s Lutheran Church during that time.

In 1965 a two-room cabin was moved onto land on the north end of Lake Ida in Douglas County Minnesota.  This land was part of his family’s homestead since 1876, it being passed down by his Uncle Ted Anderson.    Together with Bonnie, they made regular visits and vacations to the cabin enjoying a little piece of paradise.     In 1983, he retired and moved back to Minnesota, turning the cabin into their home.    He eventually began working part-time at KSAX TV in maintenance, along with being a chauffeur for Bonnie, driving her to and from her job as a baker at Knute Nelson Home.    He did so enjoy lake life and being back in his boyhood home.

Raymond and Bonnie were longtime members of Calvary Lutheran Church, but recently became members of Shalom Lutheran Church.   In October 2019 Raymond moved to Bethany on the Lake where he received great care as he gradually succumbed to the impacts of dementia.

He was preceded in death by his parents, Alfred and Clara; brother Gordon, sisters Alpha (Kluver), and LaJune (Wollin).

A Funeral Service will be held on Monday April 25th at 11:00 AM at Shalom Lutheran Church in Alexandria.  A visitation will take place one hour prior to the service at the church.

Interment will be at Carlos Prairie Cemetery.

Memorials can be made out to either Shalom Lutheran building fund, or Douglas County Hospice.

To order memorial trees or send flowers to the family in memory of Raymond Anderson, please visit our flower store.
Open