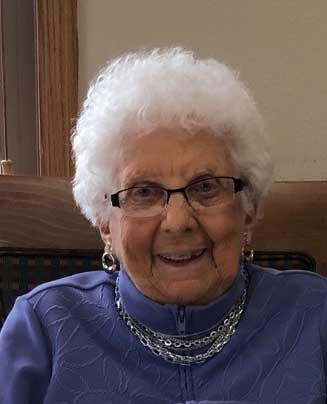 Phyllis was born in Hudson Township in Alexandria on April 17, 1927 to David and Caroline (Hall) Henriksen.  When Phyllis was in the 6th grade her family moved to a farm west of Alexandria.  She attended District 99 school and graduated from the 8th grade, then attended Alexandria High School  and graduated with the class of 1945.  After graduation she was a secretary for the Douglas County Extension office. She was united in marriage to Lamont Mounsdon on November 3, 1946 at the United Methodist Church in Alexandria where they remained lifelong active members. After raising her family Phyllis returned to the work force with positions at the Park Region Echo (now Echo Press).  She also worked at the Boston Drug store.  Phyllis and her Sister, Doris, owned and operated a craft store on Broadway  called the Kwik Knit shop  until 1978. Lamont retired in 1979 when they both took to crafting and attending craft sales across the Midwest with both making and selling their products. Both enjoyed the traveling and making new friends.  They also traveled to Alaska, Australia, New Zealand and Norway with friends and relatives making many memories.  Both retired again in 2000 and continued to live in their home until their health failed. Phyllis passed away on April 22, 2022 at Alex Assisted Living with her family at her side.  She celebrated her 95th birthday on Easter Sunday. Phyllis is survived by her children Craig (Elaine), Diane (Curt Anderson) and Keith  (Gaye): 7 Grandchildren, 10 Great Grandchildren and 3 Great-Great Grandchildren. She was preceded in death by her husband Lamont and all of her siblings. Family would like to thank Dr Josh Eken, Douglas County Hospice, and Alex Assisted Living for their excellent care and for their ability to appreciate Mom's sense of humor.

Visitation will be held on Wednesday, April 27, 2022, 10:00 -11:00 AM at the Anderson Funeral Home with a Funeral Service at 11:00 AM.  Burial will be at Kinkead Cemetery.  Service will be live streamed for those unable to attend.

To order memorial trees or send flowers to the family in memory of Phyllis Mounsdon, please visit our flower store.
Open