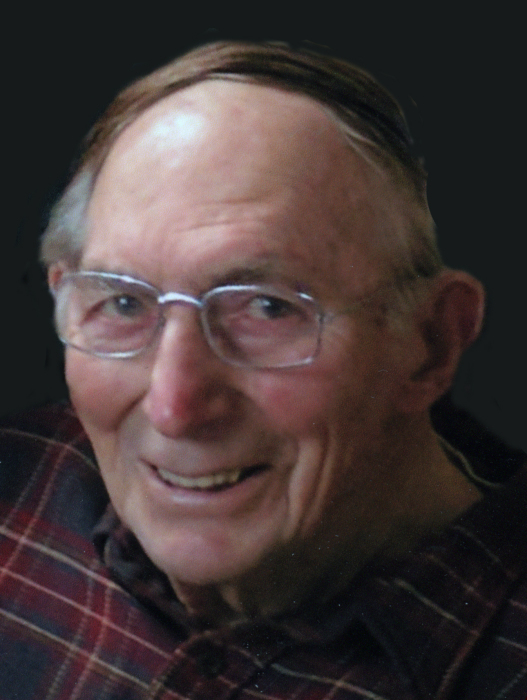 Orrin Thaddeus Johnson was born October 4, 1926 in Holmes City, MN, the son of Arthur and Hazel (Johnson) Johnson. He attended country school while his family lived in Brandon, MN and Garfield, MN. The family moved to Alexandria, MN where Orrin graduated from Central School. Orrin was a member of 4-H and Future Farmers of America. He continued his education at the University of Minnesota School of Agriculture, St. Paul Campus, graduating in 1948

Orrin joined the United States Army. He served at Fort Dix and in Korea as an aircraft mechanic and helicopter crew chief. In 1956, he was stationed at Camp Desert Rock, NV where he participated in the atomic bomb tests. Following his service, he attended St. Cloud Teacher’s College and received his education degree. When he had completed his student teaching internship, he decided that teaching wasn’t for him.

Orrin was singing in the church choir when he met a young schoolteacher who had also joined the choir. On August 15, 1959, Orrin was united in marriage to Irene Berglund in Fosston, MN. The couple made their home in Alexandria and were blessed with two children.

Orrin began farming. In 1972, he purchased the farm from his parents near Alexandria where he raised beef, hogs and crops. His farming career was in partnership with his brother, Russell. Eventually Russell and Orrin turned the management over to Russell’s son, Don Johnson. Following Russell’s death in 2010, Orrin continued to assist Don with farming whenever he could. If he wasn’t up to loading seeders or driving tractor, he kept up on farm activities by heading out in his golf cart. Farming was Orrin’s hobby. His favorite show was the Millennial Farmer. He loved working on the farm, loved visiting about the farm, loved lending a hand or some timely advice and he loved driving tractors. Restoring and showing tractors was also a favorite activity. Orrin was a member of the Pioneer Tractor Club.  In 1991 Orrin and Russell were chosen as the Douglas County Conservation Farmers of the Year for their tree planting and conservation tillage practices.

Orrin was a longtime member of the Golden K’s Kiwanis Club. He was also a member of the American Legion. Orrin was a man of great faith. He was very active in his church, First Baptist, which later became Cornerstone. He served as a deacon, treasurer and trustee, providing leadership for his church; and loved singing in the choir. In 1990 he participated in a mission trip to build a church in Latacunga, Ecuador. Orrin could always be relied upon to assist his church community in anyway he could. He was a generous man and has provided many people, churches and organizations with assistance when asked. Orrin was also very community minded; he believed it was important to attend city council and planning commission meetings. He served on the Douglas County Extension Committee Advisory Board, the Agriculture Advisory Board for Alexandria Technical College, and as chairman of the Board for the Farmers Co-op Elevator in Garfield.  His strong faith and duty to community led him to make land available to  First Lutheran Church and the NorthStar Christian Academy.

On Saturday, October 5, 2019, Orrin died at the age of ninety-three years. He is preceded in death by his brother, Russell Johnson. Orrin is survived by his wife, Irene Johnson of Alexandria; son, Greg Johnson and wife, Danielle, of Richfield, MN; daughter, Stephanie King of St. Peter, MN; grandchildren, Forrester Johnson, Ascher Johnson, Mackensey King and Geoffrey King; and many close nieces and nephews.

A funeral service will be held 11 AM Friday, October 11, 2019 at the Cornerstone Church in Alexandria. Reverend Darryl Knappen will officiate. Interment will follow in the Evergreen Cemetery in Alexandria. Military honors will be provided by the Alexandria Veterans Honor Guard. Visitation will be from 6 to 8 PM Thursday at the Anderson Funeral Home in Alexandria. www.andersonfuneral.net

To order memorial trees or send flowers to the family in memory of Orrin Johnson, please visit our flower store.
Open