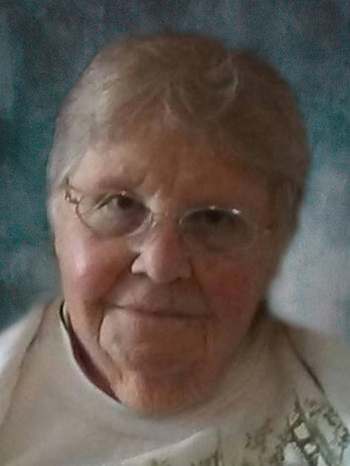 Norma “Rusty” Jean (Salto) Blankenship was born on November 20, 1938, in La Grand Township, Douglas County, Minnesota to her mother, Mary Salto.  She graduated in 1956 from Central High School in Alexandria, MN.  Rusty enlisted in the U.S. Army and served as a nurse from 1957-1960, where she met John Blankenship.  After her honorable discharge Rusty moved to Mansfield, Ohio.

Rusty was united in marriage to John Blankenship on June 22, 1960, at her aunt and uncles, Ann and Delpin Wesen home on Pocket Lake.  To this union the couple was blessed with two children, Karmen and Gregory.  Rusty continued to work as a nurse at the hospital and nursing homes in the Mansfield, OH area for over 25 years.  After retirement, John and Rusty moved to Garfield in 1991.  John died on June 3, 1999, and Rusty moved to Brandon shortly after.

Rusty was the matriarch of the family whom she loved dearly.  She was generous and would do anything for anyone and was always taking care of someone.  Rusty loved fishing and everything was a competition, she even loved to cook fish even though she was allergic and couldn’t eat any fish.  She was very dedicated and involved with the veteran groups.  Rusty was very involved with area cemeteries, especially White Garden Cemetery which she took great pride in being on the board.  In her spare time, Rusty enjoyed reading, knitting, gardening, and mowing the yard with the tractor, and having sweets from ice cream to chocolate or salt water toffee.

To order memorial trees or send flowers to the family in memory of Norma Blankenship, please visit our flower store.
Open