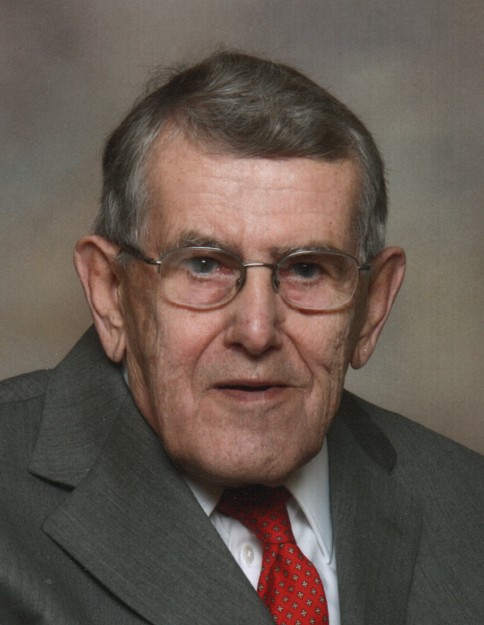 Norbert Cecil Olson was born on July 10, 1926, to Valerie (Haskell) and Ole C. Olson in Faribault, Minnesota.  He attended St. Lawrence and Immaculate Conception grade schools and Bethlehem Academy in Faribault, where he was voted homecoming king and lettered in basketball and football.

Norb enlisted in the United States Navy in 1944, where he was a Signalman in the Armed Guard.  He was stationed in the Philippines.  Norb graduated from St. Thomas College in 1950, with a BA degree in English.

Norb started his career working for Cargill in Minneapolis as a purchasing auditor in 1950.  In 1953, he started his lifelong career with the Boy Scouts of America.  Norb was a District Executive in Mankato and Minneapolis.  He was then promoted to Scout Executive at Pheasant Council in Huron, South Dakota. He finished his career in Cedar Rapids, Iowa where he retired in 1987.

Norb was a quiet, gentle man who took great pride in his family. His greatest joy was watching his children and grandchildren grow up. Norb loved many pets throughout his lifetime.  He was an avid fisherman, who enjoyed fishing salmon in Alaska, walleyes in South Dakota and crappies on Lake Cowdry. He enjoyed many outdoor activities which included camping, birdwatching and gardening.  He also liked cooking, woodworking and traveling.  Among his travels with Bette, some of his favorite places were France, Switzerland, England, Italy and Hawaii.

Norbert passed away peacefully in his sleep, on July 11, 2021, at his home in Alexandria, MN at the age of 95. He is survived by his loving wife, Bette; daughters, Nancy Olson (husband, Steve Drake) and Beth Schumacher (Tony); grandchildren, Cody (Kimberlee) Schumacher, Wyatt Schumacher, Audrey Olson-Drake, and Evan Olson-Drake.  He is preceded in death by his parents, Ole C. and Valerie Olson; mother and father-in-law, Ellen and Elmer Jacobson.

A Funeral Service will be held 1:00 PM on Monday, July 19, 2021, at St. Mary’s Catholic Church in Alexandria.  Visitation will be held for one hour prior to the service at the church.  Interment will be at Mount Hope Cemetery in St. James, MN at 1:00 PM on Tuesday, July 20, 2021.  Military Honors will be provided by the St. James Honor Guard.

To order memorial trees or send flowers to the family in memory of Norbert Olson, please visit our flower store.