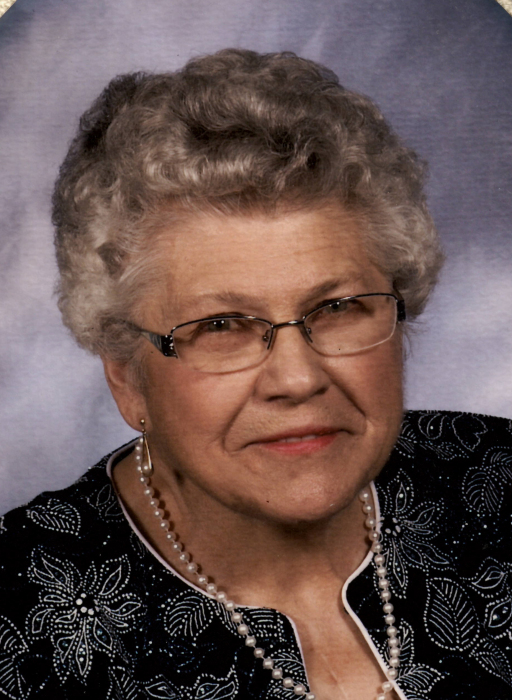 Nadine Cordelia Johnson was born on August 15, 1920 to Christopher and Agnes Johnson on the home farm in Lund Township, rural Evansville, Minnesota. She was the oldest of four children.

Nadine was baptized and confirmed at Our Savior’s Lutheran Church in Evansville. She attended grade school at District #35, the Bordsen School. In 1939 she graduated from Evansville High School. She attended Concordia College, Moorhead, for a short time.

On June 1, 1941, Nadine and Orvin T. Johnson, also from Evansville, were married at Our Savior’s Lutheran Church. Orvin and Nadine farmed in Urness Township, rural Evansville, for 28 years before moving to Alexandria where they farmed in Carlos Township until Orvin’s death in 1994. Nadine moved off the farm and resided in Alexandria in 1995.

Orvin and Nadine were foster parents to children and an adult for over 25 years.

Nadine’s strong faith in God was evident throughout her lifetime. She was a Sunday School teacher, member of Ladies Aid and served in several positions, and participated in Bible Studies. She and Orvin were members of St. Petri Lutheran, Shalom Lutheran and Nadine became a member of St. Luke’s Lutheran, Garfield, in 2010.

Over the years Nadine was employed at several places in Alexandria, including receptionist at Knute Nelson Memorial Home. She was active in the community as well. She enjoyed participating in the Urness and then the Carlos Homemakers, Urness 4-H Club leader and served on the Knute Nelson Auxiliary. Her Norwegian heritage was very important to her. She was a charter member of the Sons of Norway Runic Vennskap Lodge. She visited Norway twice. Nadine loved Christmas and the Scandinavian traditions, especially serving the Christmas Eve Meal. She enjoyed entertaining any time of the year! She enjoyed sewing and quilting and also flower gardening both indoor and outdoor.

Nadine died on Sunday, November 15, 2020 at the Evansville Care Center.  She was preceded in death by her parents, her husbands Orvin and John, an infant daughter, son-in-law Mike Kummrow, granddaughter-in-law Lynn Johnson, 1 brother, 3 brothers-in-law, 2 sisters-in-law, and a special niece.

Visitation will be held on Wednesday, November 18, 2020, 4:00 – 7:00 PM at the Anderson Funeral Home with a time of sharing at 6:30 PM.  A private family service will take place at St. Petri Lutheran Church.  Burial will be at the Church Cemetery.

To order memorial trees or send flowers to the family in memory of Nadine Johnson, please visit our flower store.
Open