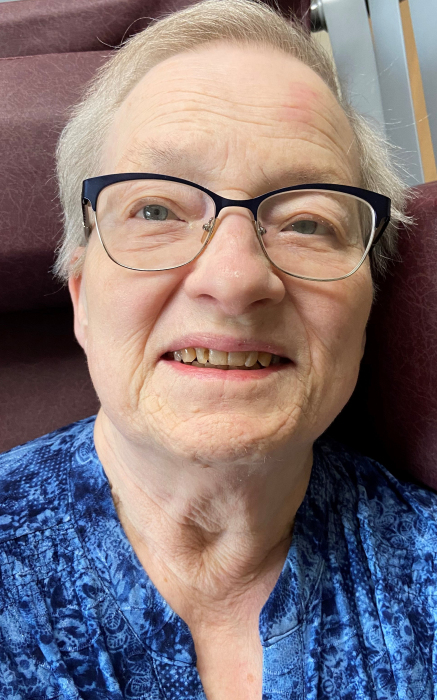 Myrna Marie Golnitz, 79, was called home to Jesus after succumbing to Lewy Body Dementia on Monday, April 26, 2021, in Alexandria, Minn. Myrna was born in Aberdeen, South Dakota on June 21, 1941, to Harold and Marion (Sumption) Larson. As the only daughter of a railroad working father and a farming mother, she learned early on her joy of serving others by tending to the house, cooking and taking care of her four younger brothers. She was baptized May 19, 1961 and confirmed her faith on May 21 of that same year. She attended State Teachers College in Ellendale, ND and graduated with a degree in education. She went on to marry her high school sweetheart Robert Golnitz on June 23, 1963, at St. Paul’s Lutheran Church in Frederick, S.D. They set down roots in Long Prairie, Minn. where she taught kindergarten for one year and then devoted her time to raising their five children and supporting and assisting Robert in his ministry at Trinity Lutheran Church and School. Her upbringing and work ethic served her well for the rest of her life as teacher, mother and care-giver to others. Myrna relished the chaos of coordinating and cajoling her kids through their 4-H projects and school activities. All of this prepared her for her “retirement” job as the site manager for the nutrition program at the Long Prairie Senior Center. In her spare time, she enjoyed reading, cooking, gardening and spending time with her “dandy dozen” (grandchildren). Myrna’s family and her varied roles and experiences gave her a vast library from which to draw for her entertaining storytelling and the distinctive nicknames she gave. She also always made sure everyone was taken care of, well-fed and treated everyone as an extension of her own family. Myrna was preceded in death by her parents, husband, brother, uncles and aunts. Survivors include brothers: Helga, Virgil, Dennis (Chris) Larson; sister-in-law Clara Larson; nieces and nephews: Josie Gorecki, Kelda Pharris, Craig Larson; children: Lucy (Jeff) Roste, Liz (Neil) Perryman, Randy (Stephanie) Golnitz, Laura (David) Kruse, Lana (Jonathan) Henry; grandchildren: Jazmin (Chase) Duwenhoegger, Jana, Jaran, Jacy Roste; Taylor, Bailey, Riley, Brady Perryman; Rachel Golnitz; Chanel Kruse; Danielle, Tyler Henry; grandnephews and nieces: Cerelia, Quade, Novella Pharris; great grandchild: Banks Duwenhoegger. A memorial service will be held on Friday, June 18, 2021 at 3 PM at Zion Lutheran Church in Alexandria, Minn. with visitation preceding at 2 PM.  The service will be lived streamed for those unable to attend.  A burial service for Robert and Myrna Golnitz will be held on Sunday, June 20 at 1:30 PM at Wayside Cemetery in Frederick, S.D.

To order memorial trees or send flowers to the family in memory of Myrna Golnitz, please visit our flower store.