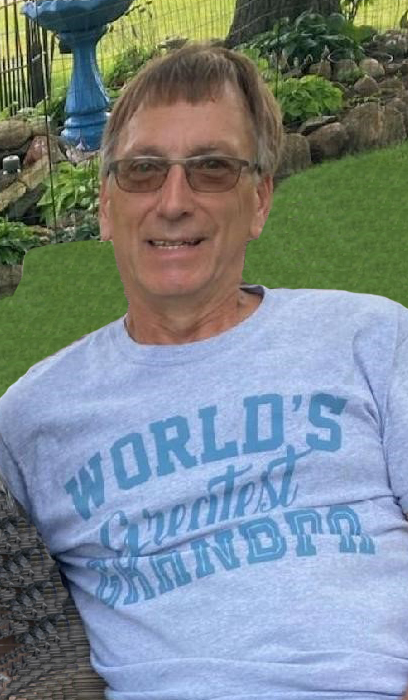 Michael Harlan Wendland, son of Harlan and Jean (Aspelin) Wendland, was born on August 25, 1958, in Marshall, MN. However, he lived most of his life in Alexandria, MN.  He graduated from Jefferson High School in 1976. While in high school, Mike met the love of his life, Pam Burss.  They were united in marriage on August 6, 1976, in Sisseton, SD.  Together they made their home in Alexandria where they raised three children, Corey, Kayla, and Caitlin. Mike worked in various jobs around Alexandria, but most recently worked as a welder at Standard Iron in Alexandria for nearly 30 years.

Mike was passionate about go-kart and stock car racing.  Mike always said, “I was almost born at the racetrack” as his mother went into labor at a racetrack. Mike’s passion for racing was evident at a very young age as he worked on his Dad’s car, driven by Jim Johnson, when he raced at Viking Speedway. He built and maintained go-karts for his brother, Steve and his son Corey. When Corey started racing stock cars, Mike was his crew chief. Over the years, he spent countless hours on many successful race teams, acquiring multiple championships. Over the years, Mike has made many friends at speedways across the Midwest. He also loved the adrenaline rush of NHRA drag racing.

After the passing of his father, he took very good care of his mother, assisting her with her numerous beautiful gardens, mowing lawn, and other daily errands. He even taught her how to spear fish in an icehouse. This was something they really enjoyed doing together. Mike spent many hours on the ice, angling, spearing and passing this love down to his children and grandchildren. Mike also enjoyed deer, duck and pheasant hunting with his uncles, cousins, brother Steve, and nephew Jake Wendland.

Patient, kind, loving, friendly, and honorable are just a few words that describe Mike. He was a perfectionist in everything he did. His lawn was always green and cut perfectly. Next door neighbor, Josiah Opp, would walk over whenever Mike was outside and was eager to learn and help. Mike took the time to teach kids in a way they could understand.  He always lived his life by being kind to others and doing the right thing.  He loved his family dearly, especially his grandchildren.  His love for his grandchildren was the only thing that superseded his love for his hobbies. He was very excited for the arrival of his newest grandson, due in January.  Mike will be dearly missed by those who knew and loved him.

A Celebration of Mike’s life will be held on Friday, October 8, 2021, at 11 AM at the Anderson Funeral Home Chapel with the Pastor Trinity Opp officiating.

A visitation will take place on Thursday, October 7, 2021, from 4-7 PM at the Anderson Funeral Home and one hour prior to the service on Friday.

Interment will be in East Moe Lutheran Cemetery.

To order memorial trees or send flowers to the family in memory of Michael Wendland, please visit our flower store.
Open