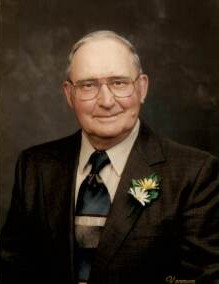 Merill R. Kiehne passed away peacefully at Windmill Ponds in Alexandria MN on July 11th 2022. Merill, son of Myrtle (Hanson) and Otto Kiehne is the second youngest of 5 children and grew up in the farming community of Holmes City, located west of Alexandria.

During Merill’s early years he worked on the family farm and performed other odd jobs to help the family make ends meet during the Great Depression. He married June Gullgren in 1943 and moved into a cabin at Geneva Lodge which was owned and operated by June’s parents, Myrtle & Frank Gullgren. Merill & June continued to live and work at Geneva Lodge while their two sons, Jerry and Thomas, were born. During that period, Merill started working in the construction field building homes with Walter Westlund. Using experience gained while working construction, Merill built his first house on the corner of 12th Ave and Jefferson Street where his two daughters Cheryl and Jilleen were born.

By 1948 the post-war construction industry had thrived and Merill started building a series of several personal homes on Westwood Drive. During evenings and into the late night he would build and weatherproof the basement of a home which the family would then occupy while continuing to complete the upstairs construction during his off[1]work hours. Shortly after completing a home he would start the process all over again and this continued throughout the construction of 4 homes on Westwood Drive in Alexandria.

In the late 1960’s June and Merill decided that he needed to get into an occupation that offered a more secure future for retirement. He applied for and was hired by Alexandria Lake Area Sanitary District (ALASD). ALASD sent Merill to school where he received his Class A License. He remained with ALASD for nearly 20 years advancing through many upward mobility positions before retiring in 1984.

June’s deteriorating lung disease created a need for continuous caregiving, which Merill did unselfishly, for 24 years, until June’s passing in 2008. During those years of caregiving and maintaining their home on 8th Ave East, Merill planted and maintained a raspberry garden which earned him the nickname of “The Raspberry Man” in Alexandria. Merill is survived by three children; Jerry (Patricia) Kiehne of Punta Gorda, FL, Thomas (Pam) Kiehne of Austin, TX, and Jilleen (Warren) Lagerquist of Spicer, MN; a sister, Lois Rosenquist of Alexandria, MN; 10 grandchildren, 18 great grandchildren, and 1 great, great grandchild. He was preceded in death by his wife June, a daughter Cheryl Brennan, a brother Harold, and sisters Ruth, and Lorraine.

Funeral services will be held 11:00 AM on Wednesday, July 27, 2022 at Anderson Funeral Home in Alexandria. Visitation will be held for one hour prior to the service at the funeral home.

To order memorial trees or send flowers to the family in memory of Merill Kiehne, please visit our flower store.
Open