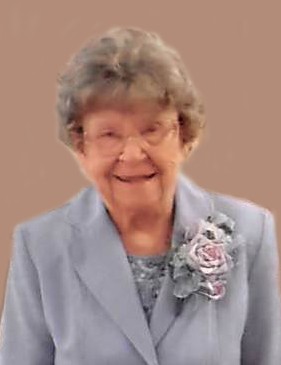 Mayme Eleanore Olson was born on March 16, 1924, the daughter of Edwin and Mabel (Severson) Olson at her maternal grandparent’s farm near Barrett, MN.  She was born prematurely weighing only 3 pounds but never spent a day in the hospital.  She was baptized when she was 2 days old by Reverend Iver Sandberg of Our Savior Church in Barrett.  She was wrapped in cotton and kept in the warming oven of the kitchen stove.

When she was 2 years old they moved to the Garfield-Alexandria area where a brother and sister joined the family.  Mayme attended country school district 8 in Moe Township for a short time.  The family then moved to the Severson Farm near Barrett.  She attended school district 32 in Elk Lake Township.  When she was in the 8th grade, she won the Grant County Spelling Championship which entitled her to a trip to the State Competition at the Minnesota State Fair.

Mayme attended Barrett High School for 3 years when she was diagnosed with tuberculosis.  She spent 2 years at the Ah-Gwah-Ching Sanitarium near Walker, MN.  She returned to school graduating in 1945 as Co-Valedictorian. She furthered her education by attending the Minnesota School of Business in Minneapolis for 9 months.  Her first job was in Spokane, Washington where she stayed with an aunt, uncle and cousin.  Returning to Minnesota in 1948 she worked at various businesses, Central Construction of Wilmar, A.P. Hustad Co.; Douglas County Treasurer.

She began her banking career at 1st Farmers National Bank and Alexandria Bank & Trust.  When a charter was issued for a new bank, she was one of the workers who opened Community State Bank in 1972.  She worked at Norwest and Wells Fargo Bank for 23 years before retiring in 1995.

Mayme moved to Nelson Gables and wore a different hat every day.  She spent her last years in the care of the Knute Nelson Care Center.

Mayme is survived by her brother Vernon Olson; sister Luella (Olson) Vendell and many nieces, nephews and cousins.

Anderson Funeral Home is assisting the family with arrangements.

To order memorial trees or send flowers to the family in memory of Mayme Olson, please visit our flower store.
Open