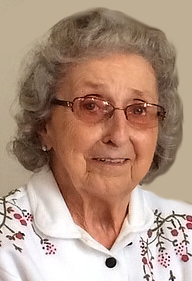 Marcella Ruth (Zastrow, Larsen) Holverson was born in Garfield, MN on March 19, 1925 to Frank and Alvina (Brueske) Zastrow.  She attended grade school in a one room schoolhouse in the township of Leaf Valley, MN until graduating in 1939. She moved to Alexandria, MN where she worked for room and board while attending Alexandria High School.  Shortly after graduating from High School in 1943, she moved to St. Paul, MN to live with her eldest sister Sadie until she found employment with Cities Service Oil Company working as a bookkeeper, operating the bookkeeping machines and doing general office clerical work.

She met Walter I. Larsen while in St. Paul and they were married on September 4, 1945.  She gave birth to their first son in April of 1946, but he passed away only 24 hours later.  They were blessed with four more children, two born in St. Paul and two born in Portland, OR after they moved west in the 1950’s. She worked for several years at Gresham Berry Growers as a machine bookkeeper and later for Bingham-Willamette Iron Works & Portland Wire and Steel doing the same type of work. She and Walter were divorced in 1967 and she continued living in Portland until 1970 when her father asked her to move back to Alexandria.  Shortly after settling back in Alexandria, she went to work for Alexandria Bank & Trust until her retirement ten years later.

While living in Alexandria she met Ralph Holverson and they were happily married from June 19, 1976 until his untimely passing February 15, 1983. She worked several years for Douglas County Court Services in the probation office before relocating to Salem, Oregon in 1996 to be closer to her children. In 2012 she moved to Spokane, WA with her younger son and daughter in-law. In 2018 she moved one last time to Vancouver, WA, living with her younger son and daughter in-law the remainder of her life.   Marcella passed peacefully at home July 15, 2020 at the age of 95.

Marcella was preceded in death by her parents, an infant son, her eldest son David, three sisters and two brothers.  She is survived by her brother Jim (MaryAnn) Zastrow; by her children Dianne Larsen, Dean (Sheri) Larsen, and Dana (Randy) Berryman as well as grandchildren Jason (Sharon) Larsen, Sara, Anthony, Samantha, and Nicholas Berryman.

A funeral service will be held at 2 PM Friday, July 31, 2020 at the Anderson Funeral Home in Alexandria, MN. Interment in Evergreen Cemetery  will follow. Pallbearers are Jason Larsen, Anthony & Nicholas Berryman, Gary and Glenn Zastrow, and Leo John Rosenberger.

To order memorial trees or send flowers to the family in memory of Marcella Holverson, please visit our flower store.