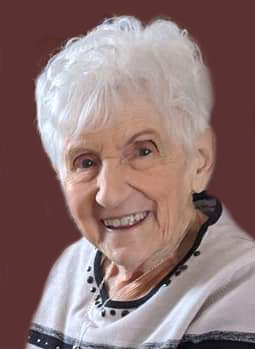 Loretta Florence Vitale was born February 4, 1926 in Detroit, MI, the daughter of Samuel and Rose (Miletillo) Vitale. She was raised in Detroit where she graduated from high school.

Sherlock Olson was traveling on a train returning from his military service when he saw Loretta and decided that was the woman he was going to marry. On January 24, 1948 the two were united in marriage. They began raising their family in Detroit but soon moved to Minneapolis, MN.

Loretta worked in the dietary department of Glenwood Hills Hospital for many years.  During this time Loretta and Sherlock bought a place on Lake Carlos near Alexandria, MN. Eventually, they made improvements on the home and moved to the Alexandria area. The couple purchased the Coffee Pot Restaurant and M & O Radiator which they operated for several years. In the 1980’s they sold the businesses and retired.

Loretta spent her time taking care of Sherlock. Eventually the couple moved into Alexandria. She enjoyed making trips to the casino and playing Bingo. Loretta also played golf. She was a member of the Red Hats club.  Loretta loved her life and her family. She was an excellent cook and baker. Loretta treated her family to Swedish meatballs, spaghetti and Italian cooking, and her gravy. Loretta’s greatest joy in life was being with her children and grandchildren.

A family memorial gathering will be held later. Interment will be in Trinity Lutheran Cemetery in Carlos. Arrangements are with the Anderson Funeral Home and Crematory.

To order memorial trees or send flowers to the family in memory of Loretta Olson, please visit our flower store.