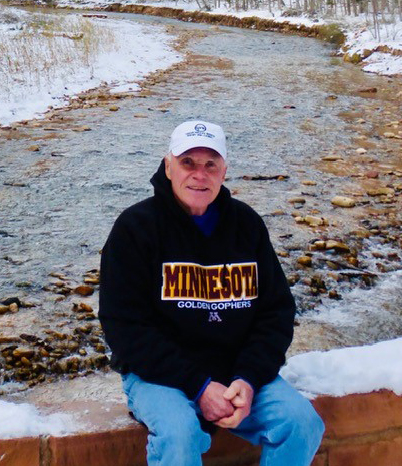 Larry A. Bartl was born on October 29, 1944 to Alfred and Bessie Bartl in Britton, SD. The family of nine lived on a farm near Stirum, ND for many years. Larry died unexpectantly on July 20th.

After graduating high school in Gwinner, ND, Larry went to barber school. His first job was in  Garrison, ND where he met his future wife, Mary Lou. The couple ultimately settled in Minot, ND where Larry went to college, worked as a salesman, then started his own business, Pro Business Forms, which he ran until he retired. Minot was a great community to raise their family.

Larry loved to camp, and the family spent many summer weekends at the lake where Larry enjoyed fishing for walleyes, having a campfire and spending time with his family. Larry was passionate about sports. Whether it was cheering for his daughters at their gymnastic and diving meets, or himself playing softball, volleyball, and a lot of racquetball over the years. He was the 1997 ND Men’s A Singles racquetball champion and he competed in racquetball in three Senior Olympics. In recent year’s his great joy was watching his grandson play baseball and hockey. Actually, any activity with Ty brought “Papa” much happiness. Larry was also an avid skier who went on many trip to Big Sky Montana and even skied in the Swiss Alps.

In 2001 he retired, and they bought their dream home on Lake Victoria in Alexandria, MN so they could be closer to their daughters. They felt welcomed into the community and made many good friends. Many miles were put on the cars with trips to Minneapolis to visit their daughters.

Larry was a man who got great satisfaction from fixing things up around the house, working in the yard and spending time in his workshop. He was not one to sit still and always had a project going.

Later in life, Larry became passionate about hiking with numerous winters spent in Utah, where there were endless trails to explore, golf to be played and friends to socialize with. There were travel adventures to Switzerland, Italy, Austria, and Germany. Disneyland and national parks were favorite US destinations.

Funeral services are Saturday, July 24 at 10:30am at the Church of St. Mary in Alexandria and visitation is Friday, July 23 from 5 – 7pm at Anderson Funeral Home with a Prayer Service at 7:00 PM

The family is grateful for the compassionate care that Larry received at Alomere Health.  In lieu of flowers, donations can be made to American Heart Association or American Cancer Society.

To order memorial trees or send flowers to the family in memory of Larry Bartl, please visit our flower store.
Open