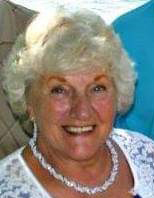 Kathryn “Kathy” Ann Bemo Corcoran Kramer was born on October 22, 1943, to Evelyn and Harry Bemo in Alexandria, MN.   Kathy was the baby of three girls.  The family enjoyed going to the different area lakes fishing and spending time together.  This became Kathy’s favorite thing to do.  She grew up in Alexandria and graduated from Alexandria High School in 1961.

In the Fall of 1961 Kathy was united in marriage to Bob Corcoran and together they had four children: Michael, Steve, Joseph and Kathryn (Bobbi).  The couple enjoyed roller skating at an early age and Kathy had very fond memories of her time spent at the Gang Plank as a teenager.

In 1985, Bob died of complications of cancer and for the next 27 years Kathy raised her four children.  In 1986, she enrolled at Alex Tech College furthering her education and then worked at the Douglas County Court Administrator Office until she retired.

She enjoyed canning and baking during this time too.  Her spare time was always digging in the dirt growing flowers.  She had a green thumb when it came to growing plants.  Several of her house plants were over 50 years.

Kathy loved to bake and at Christmas time shared her cookies with friends and family.  Kathy was a generous person who gave to those she loved – often putting the needs of others ahead of hers.   She will be remembered for her infectious laugh and was good at making others laugh too.  Her outrageous sense of humor was a gift to her family and friends.  Kathy was a die-hard Vikings fan and would clap and yell in her living room as they played.

In 2012, Kathy married another classmate, Ed Kramer.  Together they traveled and enjoyed each other’s company.  They shared jobs raising all the gorgeous flowers in their yard until it became too hard for them.

To order memorial trees or send flowers to the family in memory of Kathy Kramer, please visit our flower store.
Open