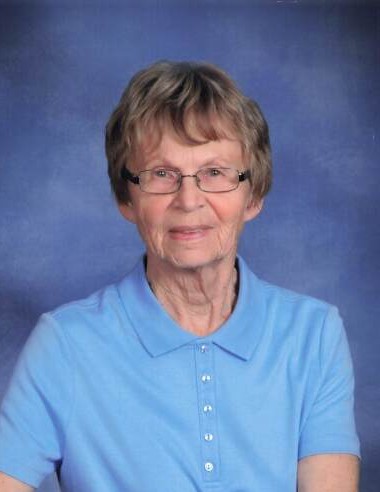 June Yvonne Sjoquist was born June 18, 1936, to Oscar and Hazel (Peterson) Sjoquist in Herman, Minnesota.  She was their second daughter in a family of six.  She was baptized at the home of Rev. Pilgrim of St. John’s Lutheran Church in Donnelly and confirmed at Bethlehem Lutheran Church in Herman.  She graduated from Herman High School in 1954, as Salutatorian.

June Sjoquist and Dale Vipond were married on December 19, 1955 at Bethel Lutheran Church in Herman.  They had three children: Cindy, Jim and Gary.

June and Chub raised their family in Herman.  June attended college at Moorhead State University and later finished her teaching degree at the University of Minnesota Morris.  She taught elementary school in Herman and Morris and later did substitute teaching in Herman, Morris and Alexandria.  She also worked part time at Delaware Insurance in Herman.  She taught Sunday school and Release Time for many years.  June was always active in the church.

June and Chub retired and moved to Alexandria in 1996.  There they enjoyed their retirement years.  June liked to golf, read, working on their yard and enjoying the lakes area. June was a Minnesota sports fan, cheering on the Twins, Vikings and Gophers.  She enjoyed time spent with her children, grandchildren, great grandchildren and last, but not least, her SISTERS (also known as the Swedish Mafia)!  June was active in their new church home, Calvary Lutheran and at the hospital in Alexandria, receiving her 1,000–hour-volunteer pin.

June passed away on July 28 at the Memory Care Unit in Grand Arbor under the care of Douglas County Hospice and the Grand Arbor Staff.  She was 85 years old.

She is survived by her three children and their spouses, Cindy and Sylvan Prothero of Norcross, Jim and Kris Vipond of Chaska, Gary and Kris Vipond of Battle Lake; six grandchildren, Nicholas, Katie, Rachel, Jacob, Jennifer and Stephanie; two great grandchildren, Bailey and Carson; two sisters, Connie Johnson and Cheryl (Jerry) Haukos, one brother, Rick (Gail) Sjoquist.  She is also survived by her in-laws Jan Vipond, Sharon Vipond and, Denny and Faye Vipond: and by numerous nieces, nephews, relatives and friends. She was preceded in death by her parents, husband, and sisters, Pat and Karen.

A Memorial service will be held on Friday, July 30, 2021, 11:00 a.m. at Calvary Lutheran Church in Alexandria, with visitation one-hour prior at the church. Burial will be at Lakeside Cemetery in Herman, MN.

In lieu of sending thank yous, the family will make a contribution to Douglas County Hospice.

To order memorial trees or send flowers to the family in memory of June Vipond, please visit our flower store.
Open