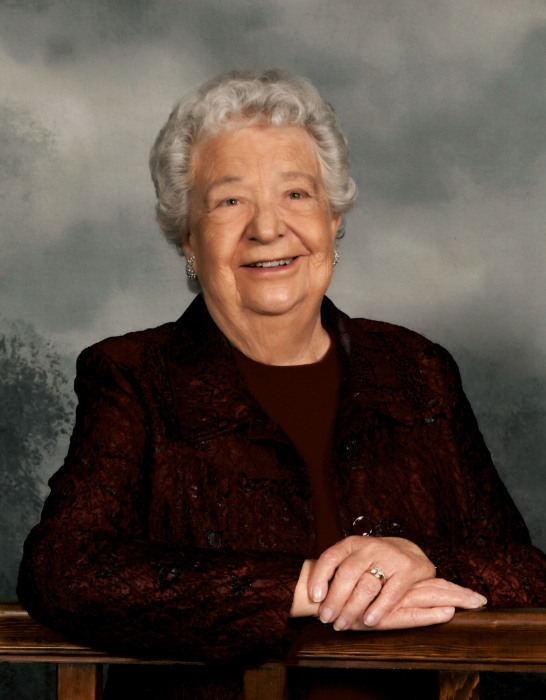 Joyce (Lake) DeGrote was born on the family farm near Hoffman, MN July 30, 1926 to Francis and Amelia (Nelson) Lake. She lived there for the first 12 years of her life. Then came the Great Depression and drought. The farm was lost, and the family moved to the Holmes City area. Joyce attended high school in Alexandria where her graduation ceremony was interrupted by the announcement that the Allies had invaded Normandy.

A week later, Joyce checked in at St. Olaf College as a member of the Cadet Nurses Corp. For the next three years, she attended classes that would lay the groundwork for a lifetime in the healthcare field. She graduated from the Swedish Hospital nursing program in 1947 and went on to work at a veterans hospital in Nebraska caring for returning war veterans.

Returning to Minnesota, she worked in a 16-bed rural hospital in Starbuck, MN. She met and married William (Bill) DeGrote from Clara City, MN who worked with his brother in a family business. She moved to Clara City where their two children, David and Barbara, were born.

Bill and Joyce moved back to Alexandria and bought Kenwood Resort on Lake Carlos in the 1950s. Joyce went back to nursing and worked all shifts and situations during the winter months while helping her husband manage the resort during the summer.

When a new technical college was established in Alexandria, Joyce and two other nurses were hired as instructors for the LPN program. Many of Joyce’s students are still good friends. During that time, Joyce began taking off-site education credits through Moorhead State University and received a bachelor’s degree in technical education.

After teaching at Alex Tech, she became Director of Nurses at Osakis Nursing Home and later Director of In-Service Education at Douglas County Hospital. She went on to develop and implement a hospice program under the administration of Douglas County Public Health. The Douglas County Hospice continues today and provided care and comfort to Joyce in her own final days.  In 2000, Joyce received the annual alumnae award from Swedish Hospital for "unselfish service to her community and humanity."

Around the time U.S. President Reagan announced his own Alzheimer’s diagnosis, Bethany Home was awarded a grant to administer an eight-county education program focusing on the disease and its effect on both patients and families. Joyce came out of retirement to administer the grant putting in motion an ongoing program that continues  to support area families in need.

While her community work in a variety of health areas left its own enduring mark, Joyce most appreciated her marriage and partnership with her husband Bill and the growing family that loved them. Together they created a home base, dished out encouragement and advice and provided opportunities for many fun-filled memories at the lake. Joyce’s commitment to her faith, family and community leaves a large legacy of love that won’t soon be forgotten.

A memorial service will be held at a later date due to COVID-19.

To order memorial trees or send flowers to the family in memory of Joyce DeGrote, please visit our flower store.