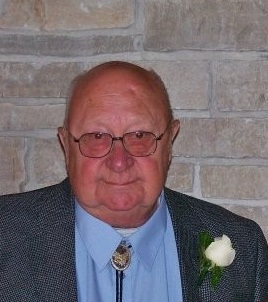 Joseph Jacoby was born in Springfield MN to Anthony and Rosella Jacoby on September 24, 1936. He attended school in Springfield MN. He was joined in marriage to Mary Ann Zitzmann on August 8, 1956 and to this union 5 children were born.

Joe and Mary began their life farming near Villard MN. From there Joe moved to selling farm equipment. He worked for various dealers that included, Allis Chalmers, Ford, Massey and John Deere.
Joe also attended auctioneering school in Iowa and added Joe Jacoby Auctioneering to his career. He was joined in this venture by Mary and several grandchildren. It became a family affair.  Joe had the pleasure of auctioning the well-known Herman Bachelors.

Throughout his life Joe was involved in his community and was a member of Grant County First Responders and Douglas County Sheriff’s Posse.   Joe enjoyed wood working and his grandchildren were blessed with projects he lovingly made.

Joseph A. Jacoby died on Sunday, August 11, 2019 at Bethany on the Lake in Alexandria at the age of 82 years old.  Joe was preceded in death by his parents Anthony and Rosella Jacoby, grandson Beau Jacoby, son in law Mike Dahle, brothers-in-law, Jack Zitzmann, Dave Heiderscheidt, Mel Weber, and sister-in-law, Joann Kaduck.

A Mass of Christian Burial will be held on Friday, August 16, 2019 at 7 PM at St. Mary’s Catholic Church in Alexandria.

A visitation will take place on Friday, August 16, 2019 from 4-7 PM at St. Mary’s Catholic Church in Alexandria.

To order memorial trees or send flowers to the family in memory of Joseph Jacoby, please visit our flower store.
Open