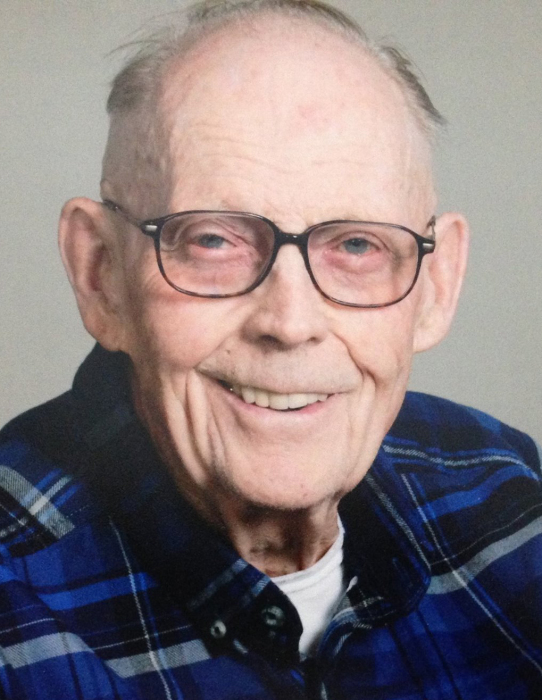 John Femrite Hagstrom was born March 11, 1925, in Lowry, MN, the son of Clarence and Mae (Femrite) Hagstrom. He attended school in Lowry and graduated valedictorian of the class of 1943 from Glenwood High School. He enlisted into the US Navy just before his 18th birthday and then the summer after high school graduation, he deployed to Corpus Christi, Texas. John served as an Aviation Machinist’s Mate 2nd Class from 1943 until 1946, after WWII ended.

After his service in the Navy, John attended North Dakota State School of Science in Wahpeton, ND in Electrical Engineering. In 1955, John and two friends from Lowry drove up to Alaska to work on building the highway there, which was quite an adventure for the three young men.

Returning to Minnesota, John farmed corn, oats, alfalfa and silage and managed a herd of dairy cows on the Hagstrom homestead, living in the same farm home where his father was born. John and his father, called “Happy,” began to develop a family campground on Lobster Lake in the early 60s that would become Hagstrom’s Resort.

John and Happy ran Hagstrom’s Resort, with his sister, Olive Ann “Ollie” coming home from teaching in California each summer between 1963 – 1973, to help with the resort. When Ollie retired from teaching and their father had passed away, Ollie and John became equal partners in owning and managing Hagstrom’s Resort. They sold the business after 29 years of operation, in 1990, to a cooperative formed of regularly returning patrons. John officially retired at that time at age 65 but continued to be active maintaining his home and land, and always helping out his neighbors with snow plowing and mowing.

John was an avid outdoorsman, enjoying hunting (deer, moose, elk, bear) and fishing. He went on many hunting trips out west and in northern Minnesota. He took family members on many boat and pontoon rides on Lobster Lake and taught youngsters in the family to fish. John never married but he and his sister Ollie, opened their home to young people who worked as farm hands and resort workers. John and Ollie always had the coffee pot on for drop-in guests, from resort patrons to friends and relatives. John was genuinely interested in their visitors’ lives. Even with his increasing memory loss in his later years, he continued to ask about his visitors’ daily lives and talk about the weather. Throughout their lives, they always cared for dogs that were so loved in their home. John and his sister, Ollie, were regular attendants at Saturday evening services at First Lutheran Church and sat in the same pew for many years.

John died on March 16, 2019, at Grand Arbor Assisted Living, where he lived for the last several years. John just turned 94. He is preceded in death by his parents, his brother Allen and sister-in-law, Eleanor, and his sister, Olive Ann. John is survived by his nephews and nieces, Tim Hagstrom and wife Rita, Liz Hagstrom and wife, Elizabeth Skalnek, and Mark Hagstrom; great nieces and nephews Grant Hagstrom, Rachel Schmidt and her husband Brian, Ingrid Schaefbauer and her husband Jake, Austin Hagstrom, and Zachary Hagstrom-Skalnek. Also grieving are beloved cousins and their spouses, including Bob and D’Ann Newman, Sandy and Harlan Block, and Gurvin and Myra Femrite, and close friends.

A funeral service will be held at 11 AM on Thursday, March 21, 2019, at First Lutheran Church in Alexandria. Interment will follow in the White Garden Cemetery near Alexandria. A visitation will be held one hour prior to the service at church. In lieu of flowers, memorials are preferred to First Lutheran Church building fund, parish nurse program or the general fund.

To order memorial trees or send flowers to the family in memory of John Hagstrom, please visit our flower store.
Open