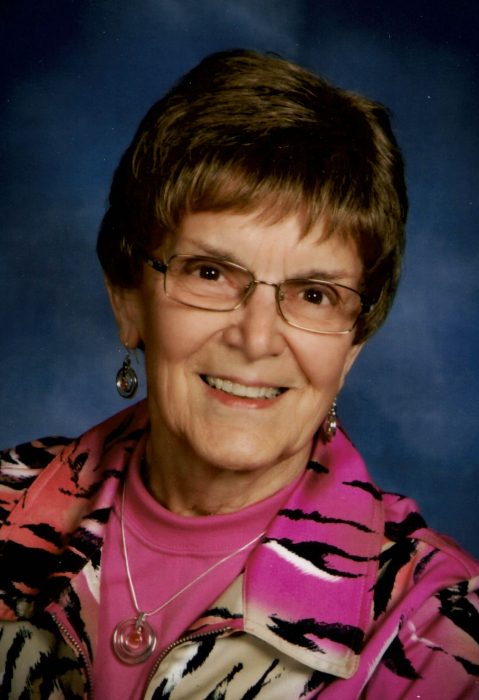 Joann (Gramma Bo) was born on January 5, 1935 in Vesta, MN to Herbert and Evelyn (Hall) Gronholz. She was baptized, confirmed, and married at St. John’s Lutheran Church in Vesta. She attended a rural Vesta country school and then Echo High School. After graduation, she married her high school sweetheart, Harlan Boushek in 1952. They farmed until Harlan was drafted and served two years in Korea. While he was serving, she worked at the Redwood Falls bank. After Harlan’s service years, they moved to Minneapolis and she worked at NW Bank. Their marriage was blessed with two sons, Randall and Richard. In 1957, they moved to Anoka and started their own business where they worked together for 25 years. Joann also worked as a seamstress for ten of those years. While they lived in Anoka, she was very active at Mt. Olive Lutheran Church. In 1990, they purchased a home in Alexandria on the lake and joined Zion Lutheran Church where Joann was involved in Women’s Fellowship, Altar Guild, and other service areas. She especially enjoyed spending time with her family at the lake, doing crafts, playing cards with special friends and her volunteer work at hospitals and nursing homes. For many years she baked cinnamon rolls on Saturday mornings and enjoyed seeing three generations of family being there, waiting to see who gets the middle one with the most frosting, or the most caramel rolls.

On Saturday, April 11, 2020, at the age of 85, Joann passed away surrounded by her family at her home after a short battle with pancreatic cancer. She is preceded in death by her parents, Herbert and Evelyn; husband, Harlan; brothers, Robert and Donald; sisters-in-law, Jan Gronholz, Marlene Gronholz, and Arlene Jett; brothers-in-law, Dick Rengstorf, Leon Boushek, and three nephews and a niece.

A private graveside service will be held on Thursday, April 16th at Morningside Memorial Gardens in Coon Rapids, with a public memorial service to be held at a later date. In lieu of flowers, memorials can be made to Zion Lutheran Church or School, or a charity of the donor’s choice.

To protect the health and safety of all, services are currently being limited as required by state and local authorities and the CDC. Expressions of sympathy during this time can be left on the condolences page available with the obituary on our website. Check the funeral home website for the latest COVID-19 update.

To order memorial trees or send flowers to the family in memory of Joann Boushek, please visit our flower store.