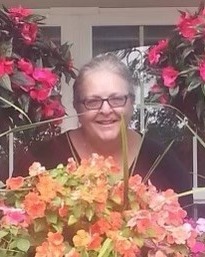 JoAn Susan (Rien) Lorntson was born on September 14, 1950, to Urban and Arlyiss (Beier) Rien in St. Cloud, MN. She grew up on a farm in Paynesville, MN and graduated from Paynesville High School. During high school,  Jo participated and excelled in debate and choir. She was a natural debater and had a beautiful, alto singing voice and played the baritone.

Jo attended college at University of MN in Duluth where she majored in English. She continued to participate in debate in college, traveling to many competitions that she often won. Jo transferred to Southwest Minnesota State in Marshall where she was a resident assistant and graduated with a bachelor’s degree. In 1973, Jo married John Lorntson and the couple continued their life together in Naperville, IL. She worked at Atlantic Aviation as an expeditor and then at JC Penney as a credit coordinator. The couple was blessed with a little girl, Jennifer, in 1980. At this time, Jo became a stay at home mom and both Jo and Jen felt extremely lucky to have this time together. Jo was a devoted and attentive mother who often took Jen to the Riverwalk to feed the ducks, zoos, parks, and trips to visit family in Minnesota.

In 2002, Jo met Ondray Hume and they created many memories over the 20 years they were together, garage saling, front porch sitting, and going on cruises. In 2015, they moved to Pocket Lake in Alexandria, MN.

Being a terrific hostess, great cook, good listener, extreme couponer, and cat lover are just a few things that Jo will be remembered for. She had a good sense of humor and was quick witted and sharp. Jo loved to garden, play board games and cards, and to work on puzzles. Jo was extremely giving and often donated to battered women’s shelters. She was known to many as “Mama Jo” and will be dearly missed.

JoAn "Jo" Lorntson died on Saturday, December 31, 2022, at Diamond Willow in Alexandria at the age of 72. She is survived by her daughter, Jennifer Lorntson; sisters, Linda (Alvin) Isdahl and Sandra Nehring; brother, Larry (Denise) Rien; life partner, Ondray Hume; friend, John Lorntson; bonus daughter, Nicole Backlund and her children, Lucas and Alaina Backlund. She is preceded in death by her parents; and beloved cats, Silky, Piggy, and Mr. Buddy.

A Memorial Service will be held on Wednesday, January 4, 2023, at 12:00 noon at the Anderson Funeral Home Chapel. A visitation will take place one hour prior to the service on Wednesday.