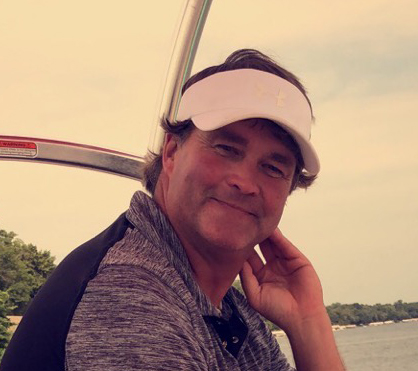 Jayme Patrick Olson was born on January 22, 1973 in Fergus Falls, Minnesota the son of Terry and Pat Olson.  He grew up on a farm north of Ashby. Jayme was confirmed at Pelican Lake Lutheran Church and graduated from Ashby High School in 1991.

As a toddler he was always pretending to go to work like his dad. He spent hours driving his tractors and trucks in the garden. At a young age Jayme had a love of the outdoors trapping gophers and hunting.  He was a three star athlete in football, basketball and track.  In his sophomore year he went to State in the High Jump. Jayme continues to hold the Ashby High School High Jump record. While in high school Jayme worked for H&R Construction.  After graduation from high school Jayme attended Moorhead State for a year and then went to work for Johnson Nelson Masonry before starting up his own business, Olson Masonry, Inc. in 1995. Jayme took great pride in using his artistic ability to create his client’s ideas into works of art.

Jayme was united in marriage to Randi Lindsey on August 17, 2013 at Lake Community Church.  The couple made their home in Alexandria where they loved to be on the lake and camp in the summer with family and friends.  Jayme’s love of hunting in the fall was being passed on to his sons Torrey and Treyton. Jaylen, Kelby and Kaeley took up his love of track. He loved following his kids sporting events and being involved in their activities. He took great pride in each of his children’s accomplishments.

Jayme will be remembered as a storyteller – he could convince people of things he didn’t know anything about.  Whenever he walked into a room with his big smile and personality, the whole room lit up.  Jayme seemed to know everyone. Everyone knew him.

His kind heart and goodness will never be forgotten.

He was preceded in death by his father, Terry and his grandparents: Bing and Bernice Olson, Selmer and Eleanor Risbrudt.

To order memorial trees or send flowers to the family in memory of Jayme Olson, please visit our flower store.
Open