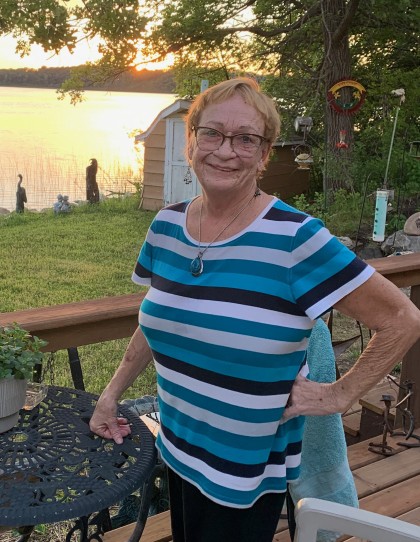 Jacqueline “Jackie” Kay Wagner, the daughter of Dale and Audrey (Hedstrom) Marcus. was born on December 2, 1955, in Fort Campbell, Kentucky. Her family moved to Cottage Grove, MN in 1960, before moving to Battle Lake, MN in 1972.  It was there Jackie graduated from Battle Lake High School in the class of 1974.  She then decided to move to Fort Meyers, FL where she worked as a cook and waitress for a few years and then moved back to Battle Lake.  In 1986, she met the love of her life, Robert Wagner.  They were united in marriage on November 27, 1988 in Lake Tahoe, NV.  Together they lived on a farm near Evansville and in 1996, bought a home on Devils Lake near Brandon.  After 20 years in their home, they decided to move to Moon Lake and wintered at the Palmdale RV Resort in Los Fresnos, TX for the last 5 years.

Jackie was a Master gardener and cook.  She enjoyed canning, baking, and used lots of different cookbooks to create wonderful meals for her family and friends.  She took pride in her gardens and produced an abundance of produce for her family to enjoy.  She liked to hunt, fish, and ride the Harley with Bob.  Jackie was the life of the party. Even though she preferred to stay at home, her outgoing personality, and her signature collection of hats she wore, got others to join in on the fun.

She was preceded in death by her parents; aunt, Rachel Moore; and cousin, Ken Hanson.

A visitation will take place on Sunday, September 20, 2020, from 4-7 PM at the Anderson Funeral Home in Alexandria, MN.

A Mass of Christian Burial will be held on Monday, September 21, 2020, at 11 AM at St. Ann’s Catholic Church in Brandon, MN. This Mass will be live streamed from Jacqueline’s obituary page on the Anderson Funeral Home website.

Interment will be in the church cemetery.

To order memorial trees or send flowers to the family in memory of Jacqueline "Jackie" Wagner, please visit our flower store.
Open