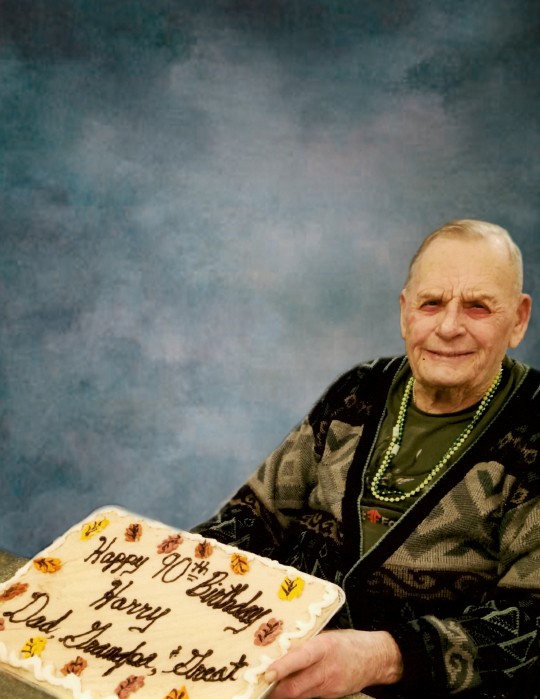 Harry Fredolph Oberg was born on November 4th, 1929 in Bismarck, ND to Anton and Cornelia (Erickson) Oberg. He was baptized and confirmed in the Lutheran faith in Scott Township, Alberta, MN. Harry enlisted in the United States Army in 1951 and was stationed in Japan until his honorable discharge from the service in 1953. On June 26, 1954 he married Arlene Delores Amundson at Lands Lutheran Church in Hoffman, MN and the couple had four children: Gary, Peggy, June, and Janice.

Harry worked hard to support his family and spent time in a variety of vocations including managing several area gas stations, driving snowplow for MNDOT, serving as town constable for a few years in Barrett, MN, and finally at ALASD sanitation before retirement. Possessing an entrepreneurial spirit, Harry started his own flea market out by I-94 and loved conversing with others over commerce.

In the words of his children, Harry was a “Jack of all trades” he loved to garden and had the best in his neighborhood, he was an avid deer and pheasant hunter and fisherman, and he tried to instill mechanical ability in his kids, once having taught his daughter, Peggy, how to change spark plugs on a snowmobile. Harry loved to travel to California, Florida, Arizona, and the Ozarks. He was a rough and tough, resilient man that survived cancer twice and an open-heart surgery and he had a rock-hard handshake to match—Harry wanted you to know what a firm, honest handshake was.

On Saturday, December 28th, 2019, at the age of 90, Harry passed away at Bethany on the Lake in Alexandria. He was preceded in death by his parents, Anton and Cornelia; wife of 64 years, Arlene; brothers, Eddy, John, and Gordon Oberg; sister, Martha Hood; great-granddaughter, Hazel Heidelberger; daughter-in-law, Laurie Oberg, and several beloved pets including Skippy, Bruno, Trixie, and Princess.

A funeral service will be held on Saturday, January 4th, 2020 at 11 AM at the Anderson Funeral Home in Alexandria with visitation starting one hour prior to the service. Interment with military honors to follow in Evergreen Cemetery.

To order memorial trees or send flowers to the family in memory of Harry Oberg, please visit our flower store.
Open