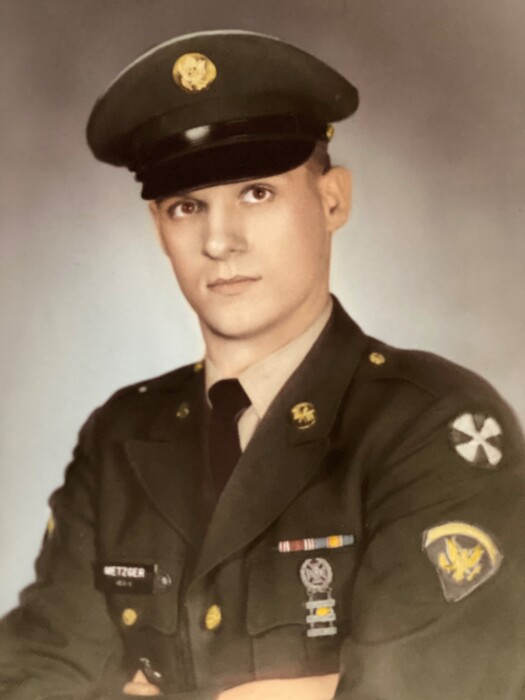 Hans Metzger was born to Theodor and Lilli (Radies) Metzger on July 15, 1943 in Czechoslovakia. He and his family lived in a refugee camp for 11 years in Germany. The family immigrated to America in July 1956. As a young man, he worked for farmers and did many misc. jobs. He was drafted into the Army in 1965. He served 16 months in South Korea, and was honorably discharged on February 11, 1967. He then joined the Army Reserves for 12 years.

On August 19, 1967, Hans was united in marriage to Rita Pfeffer. Hans and Rita then lived near Fisher, MN after they wed. They moved to Minneapolis where they raised their three loving children. Hans worked at Carson Pirie Scott (floor covering) for 20 years. He then worked at Northwest Airlines as a mechanic for 16 years before retiring in July 2005.

Hans and his son, Steve, built the couple’s house in the country by Garfield, MN. They moved in May 2007. Hans helped many people with numerous projects: building barns, sheds, decks, etc. He became a US citizen on October 6, 2008.

Hans enjoyed nature, birds and flowers, and splitting wood was fun. He mostly loved spending time with his family. Hans and Rita traveled many states, he fished in Alaska, they adventured in Europe, and took a trip around Lake Superior.

Hans died peacefully in his home from A.L.S. on June 9, 2021. He was surrounded by many beloved family members.

He is survived by the love of his life of 54 years: Rita; his 3 children: Steve (Christy) Metzger, Susan (Patrick) Langer, and Stephanie (Jesse) Tonihka; 7 grandchildren: Chelsea Tonihka, Chase (Lexi) Straight, Micah and Eli Metzger, Wyatt Langer, Annelise and Adeline Metzger; 4 brothers; 2 sisters; and many nieces, nephews, and friends. He was proceeded in death by his parents and 1 brother.

A memorial service will be held on Wednesday, June 23, 2021, 1:00 PM at St. Luke’s Lutheran Church in Garfield, with visitation from 11:00 AM- 1:00 PM at the church on Wednesday. This service will be live-streamed and recorded for family and friends to view from Hans’ obituary page on the Anderson Funeral Home website at 1 PM on Wednesday. Burial will be at Fort Snelling National Cemetery in Minneapolis, MN.

To order memorial trees or send flowers to the family in memory of Hans Metzger, please visit our flower store.