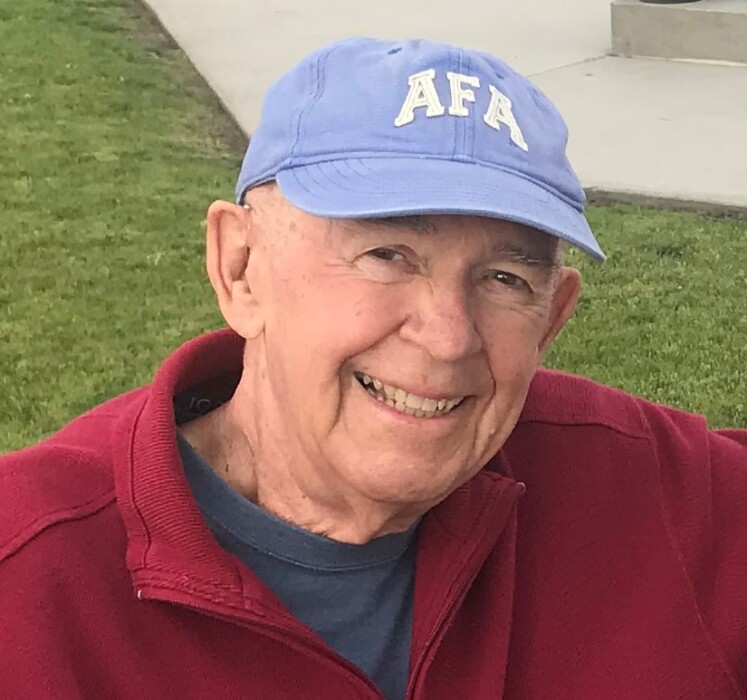 Gerald (Jerry) Sacre was born July 28, 1937, in Minneapolis, MN to Franklin and Edna Sacre.  He graduated from Roosevelt High School in 1955 where he lettered in basketball and football.  He attended the University of Minnesota and was an active member in the Theta Chi fraternity.  In 1959, Jerry graduated from the U and was commissioned into the United States Air Force through Air Force ROTC.  On October 17, 1959, Jerry married Joy Elliasen and together they began his Air Force career.

Jerry proudly served in the US Air Force for 26 years as a navigator flying the C-130 aircraft.  During his career, Jerry participated in missions across the globe.  He retired in 1986 from the Defense Mapping Agency in St Louis, MO where he worked to transform paper maps into digital format, leading the way for what is now commonly known as the global positioning system (GPS).  Shortly after his retirement, Jerry and Joy moved back to Minnesota to be close to family and friends.  Jerry was a loving son, brother, husband, father, and grandfather.  Pocket Lake in Lowry, MN was his “happy” place. He meticulously cared for their home; lawn work was truly one of his favorite pastimes!  Jerry also enjoyed spending the winter months with Joy in Destin, FL where they have many dear snowbird friends. Jerry was a man of strong faith and an active member at Calvary Lutheran Church.  He was also an avid Gophers, Vikings, and Twins fan and he wore his team baseball caps proudly.

We would like to offer our most sincere thanks to Dr. Marion Raflores (Alomere Health Oncology), Dr. Theodore Ruzanic (Centracare Wound Center, Sauk Centre), Dr. Anthony Lussenhop (Alomere Health Alexandria Clinic) and their staffs as well as the teams at Knute Nelson Home Health Care, Short-Term Rehab Center, and Hospice Care. Our family is forever grateful for their compassionate support and attention.

A Memorial Service will be held at 3:00 pm, Sunday, November 14, 2021, at Calvary Lutheran Church in Alexandria MN.

The Memorial Service on Sunday and Military Honors on Monday at Fort Snelling for Jerry, will be Live-streamed and recorded on his obituary page on the Anderson Funeral Home website, for those who are not able to attend.

Visitation will be from 2:00 pm to 3:00 pm at the church with a short reception following the service.

In lieu of flowers, memorials may be directed in Jerry’s name to Calvary Lutheran Church, 605 Douglas Street, Alexandria, MN 56308.

To order memorial trees or send flowers to the family in memory of Gerald "Jerry" Sacre, please visit our flower store.
Open