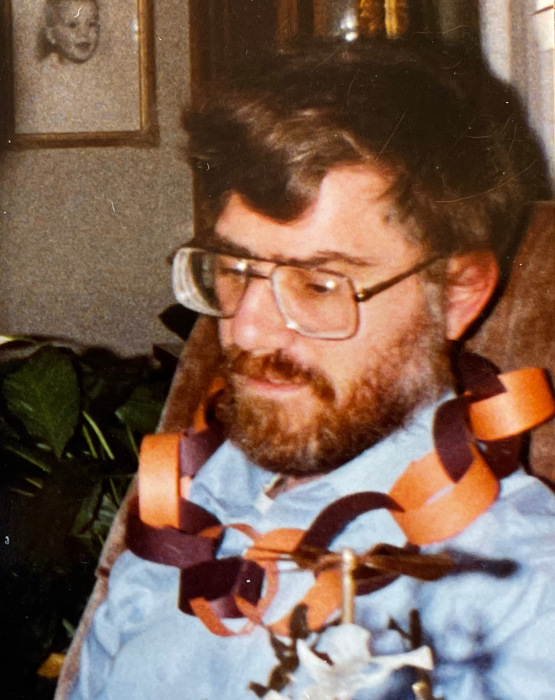 He was born December 7th, 1949 in Flint Michigan to Dr. Gerald and Laurie Buchanan.

Throughout most of his life he and his loved ones suffered through the mental illness that life dealt him. However, when he was young, he was bright, creative, imaginative and analytical. It looked like he had a promising and successful future ahead of him.

Jerry’s adventurous nature led him to attend his first year of college in California far from his home in Michigan. The remainder of his education was in his home-state at Andrews University where he eventually met and married his wife.

Late in his college career he began to hear voices and became convinced that God called him like the prophets Moses, Paul or Elijah in the Bible.

The Bible studies he gave were much about the conviction of sin, repentance and forgiveness. Others saw his sincerity including a young woman who began to believe his mission. They married, not for love, as they told me, but so that they could together advance his mission.

Before his illness was fully recognized and treated by doctors with antipsychotics his thinking and behavior affected profoundly both himself and his loved ones in very onerous ways.

He became increasingly obsessed with sin and guilt. His daily ritual started with three to four hours in prayer for his “desperate sinfulness” (as he described it) before he began his day. And, as his wife later told us, he compelled her to do same or she wasn’t sufficiently repentant of her natural sinful nature. His influence was so compelling that she began to feel he might be right.

My wife and I witnessed this for ourselves when we went for a visit – he had setup a pulpit in their living room from where he preached to us and his wife. We were confused and dismayed at the bizarreness of it all. This was a turmoil for me and my wife.

His wife had already begun to lose her grasp on what was really normal – she was torn – she felt love for her husband, and a duty to stay by his side in marriage, but she also didn’t know how she could continue on in this atmosphere of oppression. So, she finally made her escape.

Jerry didn’t understand that there was anything wrong. He was not aware of the effect on his wife and those around him. He sincerely believed he was called to be an instrument through which the Holy Spirit would convict of sin – just like prophets in the Bible and just like the legendary preachers he read about in religious history. He was under an overwhelming compulsion fed by his illness and he couldn’t see life any other way. He too later left town.

Over several years Jerry traveled across the country wherever he felt God wanted him to go. His mental illness presented itself in many bizarre ways. Believing God called him to spend time in the wilderness he moved to the mountains of Montana and lived for months in a cave. One day he slipped off the mountain, fell into trees below, was discovered and taken to a hospital. This is only one of scores of such events in his life.

His mother spent months in anguish traipsing across the country looking for him and got word of his fall. Eventually she was able to get him to doctors for diagnosis and a regimen of medications. These antipsychotics brought some normality to his life, however there were many times when the medications failed him, and he also spent multiple times hospitalized in several institutions balancing and reworking his medications.

With thanks to legal and financial provisions available in Minnesota his mother could set him up so that he could largely live independently with the oversight of social workers.

Jerry never lost his belief that God would one day make him a modern-day Elijah. He spent years with maps of the world and World Almanacs applying his analytical skills planning out in systematic detail the itinerary he would follow when God gave him the go-ahead to begin his mission.

Ironically, Jerry never felt forgiveness of his sins. None the less he believed that when God granted his forgiveness (or he felt that He did) that he could then begin his mission.

Jerry never felt worthy of being called by God, he would often remind me that Moses said, “O my Lord, I am not eloquent, … I am slow of speech, and of a slow tongue.” Jerry would say that God can use the weakest of the weak to do his great work.

Though his medications helped him to be able to function sufficiently to live on his own he maintained his insistence that God would eventually call him to his mission. As he got older, he began to believe that God would restore him back to a youthful age of his mid 20’s and He would restore his wife back to him and together they would complete Gods work and hasten Jesus’ return.

Jerry is preceded in death by his parent’s Dr Gerald and Laurie Buchanan and nephew David, son of brother Douglas.

He is survived by his brother Stuart of Alexandria and his brother Douglas and his wife Patty of Fenton Michigan and two daughters. Daughter Jennifer Buchanan and husband Patrick Van Gilder and children Wesley, Greta, Astrid and Roderick of Valrico Florida. And Kimberly and husband Marcel Cannon and their twins Lauren and Marcel of Shelby Township Michigan.

A grave-side memorial and internment will be arranged for family and friends.

To order memorial trees or send flowers to the family in memory of Gerald "Jerry" Buchanan, please visit our flower store.