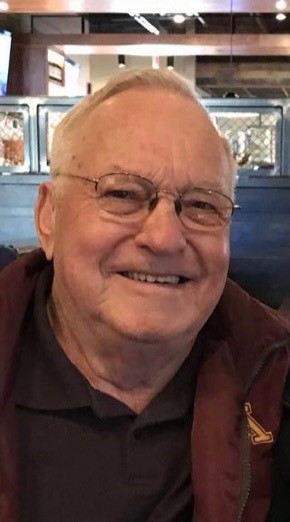 Gary Gease was born July 7th, 1938 in Garfield, MN to Clarence and Malinda Gease.  He graduated from Alexandria High School in 1956. Following his education, Gary ventured to the Twin Cities working at Mayflower and Honeywell, making a little money and a lot of friends and memories along the way. With that money starting to burn a hole in his pocket he went back to the Garfield Corner Bar and asked Herb for some advice; should he buy a Corvette or lake property. Well, he bought a piece of lakefront property off of Krohnfeldt Drive on Lake Miltona. He’d spend the next 50+ years writing his story on Lake Miltona. Clearing the land, building a cabin, canoeing the chain of lakes, touring the area on his motorcycle, all while having a beer at the end of the day. It’s during these early years of going back and forth to the Cities to work that he meets Judy. They proceed to marry and leave their jobs in the Cities and make that cabin on the lake their home. They spent 50 years together on the lake raising their two children, Suzanne (Suzie, Sue) and Todd, creating many wonderful memories. Gary was a very loving and caring husband, father and grandfather. He worked at the Alexandria Lakes Area Sanitary District (ALASD) until his retirement in 2000, making many friends and having a smile and a chuckle for everyone.

Gary’s biggest joys in life were his family & friends, Minnesota sports teams (Go Twins!, Go Gophers!) traveling, cards, that place on the lake, and his birds; the geese, martens, and the deer in the field.

In 2019, Gary decided he’d had enough winters by the lake and they moved into Arabella Manor senior community. Gary and Judy had just a brief time at Arabella before Judy’s passing on June 24th, 2021.

Memorial Service will be held on Friday May 20th at 11am, at the Ebenezer Lutheran Church in Leaf Valley. Visitation one hour prior to the service at the church. Burial will be at Ebenezer Cemetery.

Family and Friends are encouraged to wear their MN Gopher gear or their favorite MN Teams Sportswear.

In lieu of flowers memorials are preferred.

To order memorial trees or send flowers to the family in memory of Gary Gease, please visit our flower store.