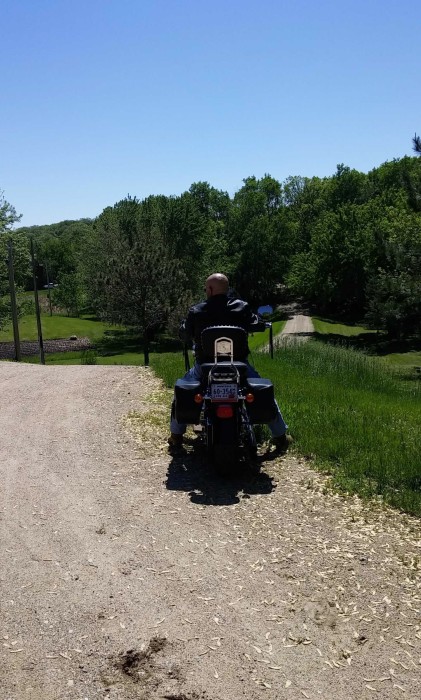 Fredrick Edward Carlson, the son of Ernest and Clara (Baumhofer) Carlson, was born on December 7, 1948 in Alexandria, MN.  Fred grew up in the Evansville area and graduated from Evansville High School in the class of 1966.  He then enlisted into the United States Army, serving overseas in Germany from January 1968 until December 1969.  After Fred completed his tour, he moved back to Evansville.  He met the love of his life, Gloria Miller, at a dance in Alexandria.  They were united in marriage on April 22, 1972 at Zion Lutheran Church.  Four children were born to this union, Scott, Ryan, Jamie, and Daniel.  Fred worked for UPS for over 30 years delivering packages to customers all around the five-state area.  Fred retired in 2000.

Fred and his family lived in Columbia Heights until 1981, when they moved to their home near Evansville.  Fred and his best friend, Steve Hanson, built the home his family lives in today. Fred loved the scenic views and secluded area where he built his home. He loved Minnesota and especially Evansville.  Fred was involved with the Evansville American Legion.  He was with the Honor Guard and called bingo for the American Legion for many years.

Fred was a Harley man.  He loved to ride his bike whenever and wherever he could.  He made trips to Maine, Alaska, Sturgis, the Carolinas, Colorado and of course everywhere around Evansville.  He was die-hard Vikings fan and loved to watch the old-fashioned Western movies.  Great sense of humor, fun, strong willed, opinionated, outgoing, easy to talk with are just a few words that described Fred.   But words like, honest, soft hearted, family man, a great husband and a great dad are the words that best describe Fred to his family.  Fred loved his family and always enjoyed gatherings with his brothers and sisters and extended family.  Fred will be missed by all who knew and loved him.

To order memorial trees or send flowers to the family in memory of Fredrick Carlson, please visit our flower store.
Open