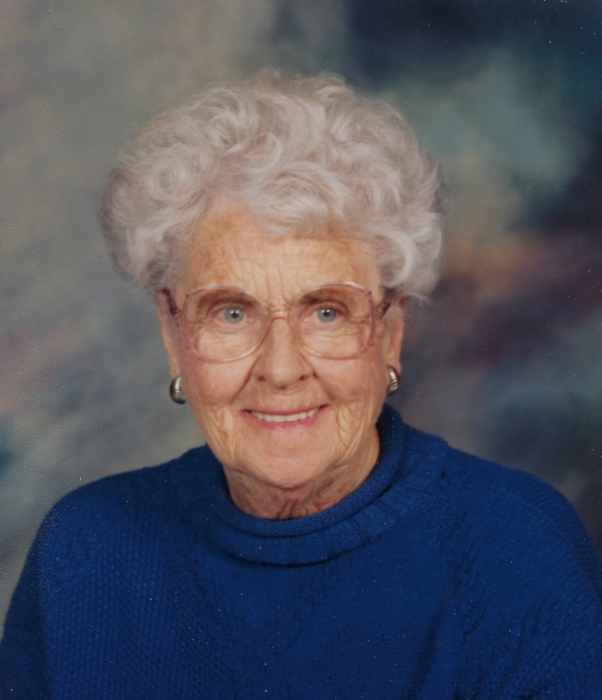 Eleanor Alice Marion (Albertson) Norling was born in La Grand Township, Douglas County on December 7, 1920 to Elling and Louise (Angen) Albertson. She was a middle child raised with two brothers, Earl and Francis. She was baptized and confirmed at East Moe Lutheran Church, attended Garfield school for eight years and graduated from Alexandria Central High School in 1939. She was employed by Garfield Telephone and by Greyhound Bus Lines in Minneapolis during World War II, working in the charter services department that transported draftees to and from Fort Snelling. She was married to Vernon Norling on April 7, 1947 at St. Luke’s Lutheran Church in Garfield. The couple lived on a farm in rural Douglas County and raised two children.

Eleanor became an active member of St. Luke’s, serving on several committees and service circles within the church. She was a member of both the Alexandria VFW and American Legion auxiliaries and the Garfield Senior Citizens organization.

In addition to gardening, knitting, crocheting and being an excellent cook, Eleanor was immensely proud of her Norwegian heritage, was practiced in the art of rosemaling and in 1997, traveled to Norway to experience the land of her ancestors. She was also a passionate and enthusiastic fan of the Minnesota Twins. Eleanor dearly loved her husband, children and grandson. Having lived nearly her entire life in Douglas County, there were countless lifelong friendships in her circle that meant the world to her.

She was cherished by many, and will be deeply missed by her son Gary Norling (Jenny) of Arbor Vitae, Wisconsin, grandson Cody Norling of Napa, California, sister-in-law Margine Norling of Garfield, numerous nieces and nephews and by Al Davison of Brainerd, who adored her as a second mother in his life.

Eleanor was preceded in death by her parents and brothers, by her husband Vernon, and her daughter Nancy.

Eleanor Norling, 99, passed away on the evening of Thursday, November 12 in Osakis, MN. Funeral services will be held at 2:00pm on Saturday, November 21 at Anderson Funeral Home, 659 Voyager Drive, Alexandria, with Rev. David Gran officiating. There will also be a time of visitation one hour prior to services. Services will be livestreamed on the funeral home website beginning at 2:00pm. Interment will be at St. Luke’s Lutheran Cemetery, Garfield.

To order memorial trees or send flowers to the family in memory of Eleanor Norling, please visit our flower store.
Open