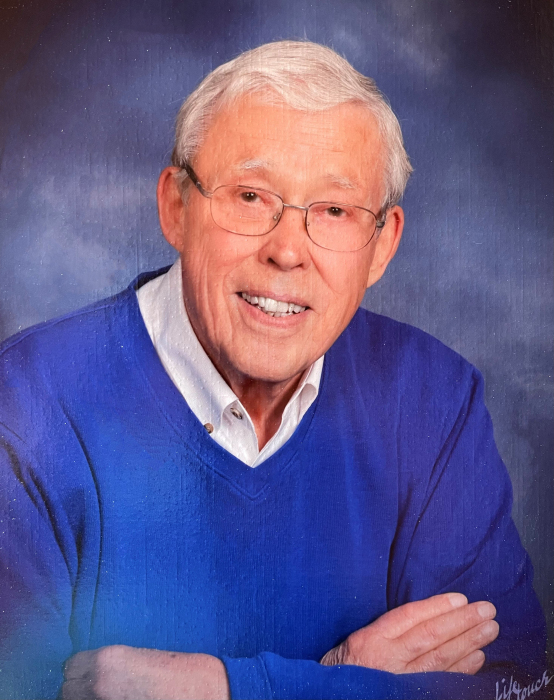 Duane Lennart Hammargren, 90, was welcomed into heaven on July 11, 2022 with open arms by his wife Jo and his daughter Kathryn.  Duane lived a rich and full life filled with love, happiness, faith and service.

He graduated from Bemidji High School and then served in the United States Air Force during the Korean War.  Following his service, Duane enrolled at North Dakota State University where he followed in his father’s footsteps and became a proud graduate of the School of Pharmacy.

He met the love of his life in 1952 and a beautiful love story and family began with their marriage in 1953.  Duane and JoAnne had 5 children who they raised primarily in Coon Rapids, MN where Duane was a partner with Don Hanson in the Hanson Drug Stores. His successful career as a pharmacist and small business owner grew from his early years watching and helping in his dad’s drugstores.

Duane and Jo moved to Lake Ida in Alexandria during their retirement in 1991.  He embraced lake life, loved family gatherings, enjoyed fishing and driving the boat for grandkids waterskiing and tubing.

He enjoyed retirement with JoAnne traveling around the country exploring historical sites, particularly Civil War battlegrounds. Duane led a life of service in retirement including Golden Kiwanis, Formation of Lake Ida Association, Douglas County Lake Association, Douglas County Sewer Board and Lake Ida Township Supervisor. Duane was most proud of his role as patriarch of his growing family.  He modeled honesty, integrity, love, and devotion for them all.  His guidance was consistently sought by his children, grandchildren, and their families.

Duane was a voracious reader, bridge player, and cribbage player, actually games of all sorts.This transitioned into being a voracious listener of books on tape and CD after losing his sight due to macular degeneration about 20 years ago. His ability to continue playing bridge and cribbage while visually impaired amazed many. He was an example for his family on how to handle adversity with grace and determination.

Duane was preceded in death by his wife, Ruth JoAnne Hammargren and his daughter, Kathryn Ann Lovik.

A Memorial Service will be held 11:00 AM on Tuesday, August 2, 2022, at Anderson Funeral Home in Alexandria.  Visitation will be held for one hour prior to the service on Tuesday. Burial will be at Lake Charley Cemetery in Ida Township for family only.

To order memorial trees or send flowers to the family in memory of Duane Hammargren, please visit our flower store.