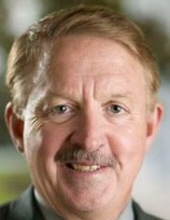 Dr. James Edney, an Omaha surgeon who was recognized as a top breast cancer specialist in the region, died on Aug. 7 in a tragic plane accident in Victoria, Minnesota. He was 72.

Dr. Edney served as a surgeon starting in 1975, at the University of Nebraska Medical Center. Early in his career, he completed a one-year fellowship at the University of Colorado. He treated thousands of cancer patients from Omaha and around the country. He was dedicated to finding new and innovative surgical treatments for breast cancer that were less invasive and made the disease more survivable. He was recognized for academic contributions to surgical oncology, and was known for his compassionate patient care.

He was a native of Omaha, and the oldest of five. Jim and his siblings grew up in Holy Name parish and went to grade school there. He graduated from Creighton Preparatory School, a Catholic high school in Omaha, in 1967. He attended Creighton University, where he joined the Phi Kappa Psi fraternity.

In 1992, he married his beloved wife, Deborah, who brought her three children to their lives: Jacob, Joy and Jordan. Joy Mertes-Smith lives in Omaha with her partner Dan Leland and two daughters. Jordan Mertes is a geophysicist who lives in Swansea, Wales. Jim was a devoted father and active grandfather.

From his earliest years, he spent wonderful summer days on Lake Miltona in Minnesota. He and his siblings would fish and swim, surrounded by brothers, sisters, mother, grandparents, aunts, uncles and countless cousins. As an adult, Jim and his wife Debbie began to spend their summers on the same lake and would welcome family and friends once the ice went out. Waterskiing, bonfires, fresh corn on the cob and sunset cruises punctuated the days.

Jim had a sharp, often acerbic, wit and largely impolitic sense of humor. You could locate his table at any restaurant by following the bursts of laughter. He read several books a week, and had a voracious curiosity about the people that he met and their stories.

At UNMC, he was Professor of Surgery, Chief of Surgical Oncology, and led the residency program and the training of scores of surgeons now spread throughout the country. Dr. Edney was elected president of the Southwest Surgical Congress in recognition of his academic contributions to surgical oncology, and also served as the president of the Western Trauma Association. He was a member of the Commission on Cancer of the American College of Surgeons. His numerous awards include a Golden Apple Teaching Award from UNMC surgery resident physicians.

He is preceded in death by his younger brother, Joseph Edney and their parents, Mary Jane Edney and John Edney. His stepson Jacob Mertes and Jacob's wife Sara Mertes tragically died in the same accident that took the life of Dr. Edney. Jim is survived by his wife, children, grandchildren, brother Dr. John (Pat) Edney, sisters Mary Lynn (Greg) Schwietz and Dr. Joanne (David) Edney-Coray, and numerous nieces and nephews.

Visitation will be Tuesday, Aug. 17 beginning at 5 p.m. at St. Cecilia’s Cathedral in Omaha, with a Wake Service at 7 p.m.

A Memorial Service will be held at St. Nicholas Catholic Church of Belle River, Minnesota, on Friday, Aug. 20 at 3 p.m., followed by burial in the church’s cemetery.

In lieu of flowers, the family invites donations to the James Edney Scholarship Fund at Creighton Prep.

To order memorial trees or send flowers to the family in memory of Dr. James Edney, please visit our flower store.