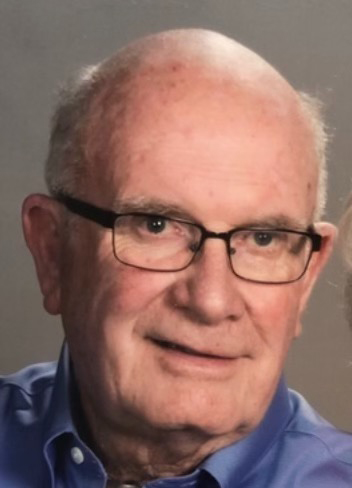 Douglas Daniel Kuiper, age 88, of Alexandria MN, formerly of Sibley IA and Ashton IA, died peacefully in his sleep on February 22, 2021 in Parkland FL after a long battle with cancer.

Doug then continued his education, attending barber school.  After graduating, Doug barbered with his father Dan until drafted into the Army in 1953.  After receiving an honorable discharge in 1955, Doug returned to barbering, eventually opening up his own shop in Sibley IA.

Doug was united in marriage to Roberta (Bobbie) Spengler in 1960.  From this union five children were born: Richard, Catherine, Elizabeth, James, and Thomas.  Doug and Bobbie later divorced in 1981.

After relocating to Alexandria MN, Doug began a career in sales, which he continued until his retirement.   Alexandria is also where he met and married Patricia Franzen in 1985.  The Alexandria area enabled Doug to fully enjoy his loves of golfing and fishing.

A Mass of Christian Burial will be held on Saturday, April 10, 2021, 1:00 PM at St. Mary's Catholic Church with visitation prior to the service.  Burial will be at Evergreen Cemetery in Alexandria. In lieu of flowers memorials are preferred to American Cancer Society in memory of Doug.  CDC guidelines of social distancing and wearing of masks will be observed.

To order memorial trees or send flowers to the family in memory of Douglas Kuiper, please visit our flower store.
Open