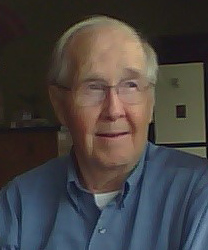 Donald Reuben Ahlstedt, the son of Reuben and Lila (Olsen) Ahlstedt, was born on January 7, 1928 in Alexandria, MN.  After graduating from Central High School in Alexandria, he enlisted into the United States Navy.  Don returned to Minnesota, after his tour in the Navy, and pursued multiple employment opportunities in the Twin Cities.  After marrying LaVonne (Gillson) Carlson on December 30, 1964, Donald adopted LaVonne’s three children: Greg, Denise, and Cindy.  Together they made their home in Bloomington until 1973, when the family moved to Coeur d’ Alene, Idaho.  In 1977, Don and LaVonne returned to Minnesota and ran a furniture store in Kensington for a while before moving back to Alexandria.  Don worked at Bethany Home for about 13 years before he retired.  During his retirement, Don continued to work part-time as a greeter at Walmart for 20 years.

Don was a quiet and gentle man, who a great sense of humor.  He enjoyed visiting with people and cared deeply for his family.  Don enjoyed telling jokes, golfing, and taking regular walks in the park.  He was also an active member of the Golden K Club of Alexandria for many years.

Donald R. Ahlstedt died on Saturday, January 18, 2020 at Bethany on the Lake at the age of 92 years old.  He is survived by his children, Greg Ahlstedt of Nashua, Montana, Denise (David) Biggar of Glasgow, Montana, and Cindy Rollins of Alexandria; 6 grandchildren; and 4 great grandchildren.  He was preceded in death by his wife, LaVonne Ahlstedt and his grandson Paul Ahlstedt.

A visitation will take place from 11 AM until 1:30 at the Anderson Funeral Home in Alexandria.  A graveside service will be held on Thursday, January 23, 2020 at 1:30 PM at Geneva Cemetery in Alexandria.

To order memorial trees or send flowers to the family in memory of Donald Ahlstedt, please visit our flower store.
Open