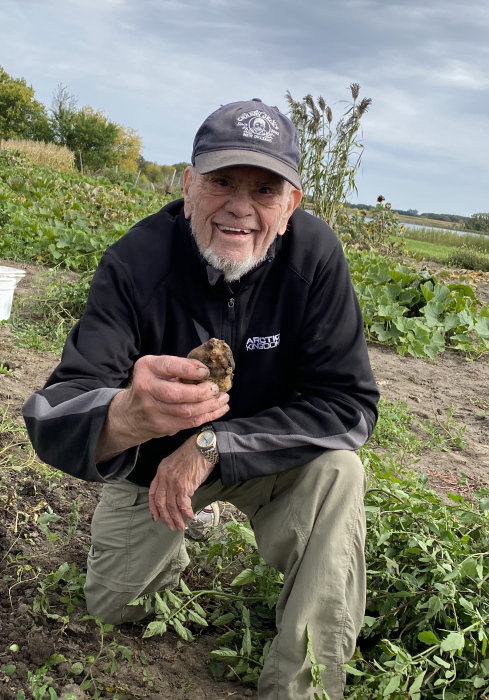 Overlooked in the histories of the cultural upheavals of the 1960s and 1970s is a little-known but highly unusual interfaith incident that took place in the tiny southwest Minnesota town of Cottonwood.

The man who sparked all those headlines, Dennis Edwin “Denny” Becker, died Monday, February 8, following a heart attack in his home near Garfield. He was 86.

“I was born ecumenical,” Becker told the Minneapolis Tribune in 1973, when a newspaper reporter visited him to learn how a Catholic priest had become mayor in a Lutheran-majority town.

Besides being born ecumenical, Becker learned lessons of economic justice at an early age, seeing first-hand how government policies and programs can affect a family. Born on January 2, 1935 in Lynd, Minnesota, he was the youngest of five children of Peter and Amelia Becker. Peter Becker had lost his farm in the Depression, and when Denny was a child, he kept food on the table thanks to a job with the Works Progress Administration, part of President Franklin Roosevelt’s “New Deal” to employ Americans in public works projects.

Following graduation from Saint John’s University — an experience and school he would remember fondly for the rest of his life — Becker entered St. Paul Seminary and was ordained a priest in 1962. He served in parishes throughout southwestern Minnesota. His political career got its start in 1970, when he learned that the Cottonwood Lutheran pastor and his family needed a place to live while a new parsonage was being built. Becker, then the pastor of St. Mary’s Catholic Church, suggested the novel living arrangement, with Becker moving into a Lutheran family’s spare bedroom, joking that he’d done it all because his new host was an expert golfer and might help him improve his game.

The goodwill he engendered helped lead to his eventual election as mayor.

Not all were pleased, however. Becker’s bid for mayor drew criticism from a parishioner who, according to the Tribune, had been unhappy with Becker ever since he preached that “there’s good in everyone, even Communists.” She complained to the bishop, who said Becker’s candidacy violated a 1918 church law.

Nonetheless, Becker stayed in the race and won, and the bishop declined to discipline him. Serving as mayor was “a personal ministry to the people of this community, it’s where my conscience is at,” Becker told a reporter. Among Becker’s accomplishments was a $766,100 contract from a Department of Housing and Urban Development low-rent housing program to build thirty housing units for elderly people in Cottonwood.

Becker never sought public office after his single term as mayor. He eventually retired from the priesthood in 2000, at the age of 65. With his life partner and co-adventurer Marilyn Tisserand, he threw himself into international work with the Global Citizens Network,  a nonprofit organization that promotes intercultural learning and helps support marginalized communities. Together, Becker and Tisserand laid concrete for a community center in Thailand, helped build a clinic in Kenya, and worked in gardens with the Quileute People in the northwestern United States.

Among his friends and family (Becker drew little distinction between those two categories), Becker was known as an indefatigable worker and an equally indefatigable conversationalist. An avid hunter and fisher, he liked nothing more at the end of the day than to grill up his catch and then sit with loved ones and “gasbag,” his own potent mixture of chatting, pontificating, and storytelling that invariably made the hours pass by unnoticed.

Denny Becker was predeceased by his sisters Irene Weidauer and Esther Andries. He will be dearly missed by Esther’s husband Harvey, by his sister Vi Suedbeck, and by his brother Gene Becker and Gene’s wife Ilene, as well as by his loving nieces and nephews. He will also be lovingly missed by Marilyn Tisserand; and by Michael Tisserand, Tami Hinz, and Cecilia and Miles Tisserand. Beyond that, he will be fondly remembered by so many more who are already longing for the days when they could pick up the phone to hear Denny gasbagging about Minnesota Vikings or St. John’s Johnnies football, about the latest turn in politics — and especially to start plotting their next adventure.

Back in 1970 in Cottonwood, after Becker had told a reporter that he’d moved into the Lutheran guest room because his host could help him improve his golf game, the reporter asked Becker about his score. Becker thought for a second. Then he replied: “If a priest is playing a good game that’s a sign he’s neglecting his parish.”

Those who knew and loved Becker remember him as a man who not only refused to neglect his parish — he dedicated his life to making that parish ever wider, ever more encompassing, and ever truer to the values of justice and compassion that he held dear and practiced unrelentingly.  In lieu of flowers, Denny's loved ones invite you to support an organization that works for justice and provides comfort and nourishment to those in need, including these Minnesota based groups: The Council on American-Islamic Relations(www.cair.com), The Legal Rights Center (www.legalrightscenter.org) and Douglas County Outreach Food Shelf (www.outreachfoodshelf.org).

Visitation will be held on Thursday, February 18, 2021, 9:30 - 10:30 a.m. at the Anderson Funeral Home.  Mass of Christian Burial will follow at 11:00 a.m. at St. Mary's Catholic Church.  CDC guidelines of wearing mask and social distancing will be followed.  For those unable to attend the service will be lived streamed.

To order memorial trees or send flowers to the family in memory of Dennis Becker, please visit our flower store.