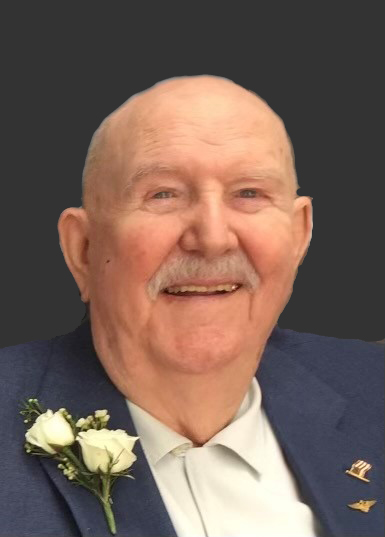 David Phillip Westergren, beloved husband, father, grandfather, and great-grandfather, passed away peacefully in the early hours of Thursday, September 23, 2021 at the age of 94 at Bethany on the Lake Care Center in Alexandria, Minnesota. David is now reunited with his late wife Betty (Caldis) Westergren, to whom he was happily married for 72 years. He is survived by two children, David C. and Lynne, five granddaughters, two great-grandchildren, and multiple nieces and nephews.

David was born on August 25, 1927 to Oscar “Red” Westergren and Lulu (Courtright) Westergren in Bertha, Minnesota. David’s sister Donna (Westergren) Kelroy was 14 years older but despite the age gap they remained close all their lives. David grew up in Bertha, played basketball for Bertha High School, and ultimately met his future wife Betty Caldis there on one of her frequent trips to town to visit relatives. Immediately after high school, David joined the Navy, serving for a year before going to Hamline University in St. Paul where he received his degree in business.  After finishing college he resumed his service as a Navy pilot, ultimately serving 24 total years in the Navy and the Naval Reserve and retiring as a Commander in 1973. David and Betty were married in 1948 and in 1950 they welcomed their first child, David C., and two years later their daughter Lynne.

During David’s Navy career, he was stationed in multiple different locations including Jacksonville and Pensacola FL, Wichita KS, Whidbey Island WA, and Okinawa, Japan. While in the Naval Reserve, David and Betty settled in Bloomington MN where he worked as a pilot for North Central Airlines before becoming a corporate pilot for Cargill. He flew for Cargill for 22 years and retired in 1987 as Chief Pilot and manager of the flight department. He and Betty thoroughly enjoyed the opportunities for world travel that came along with his career as a pilot, and out of the many wonderful trips they took, his favorite was an African safari in Kenya. He also loved watching sports, and he and Betty were Vikings season ticketholders for many years.

David and Betty also loved their Miltona lake home and after his retirement from Cargill they lived there full time, except for winters when they would drive their motorhome to Florida and enjoy their hobbies of golf and tennis. Most of his grandchildrens’ fondest memories of him are at the lake: driving the pontoon, sailing the sailboat, grilling burgers, and shamelessly waking everyone up at the crack of dawn whenever possible (where at least they were rewarded by his excellent pancakes). Even after David and Betty had to move out of the lake home into assisted living, he was happy to know that the home he had built remained in the family where his descendants could continue to enjoy it and carry on treasured family traditions. While David will be deeply missed, his memory will forever be a loving presence in all our lives.

Memorial services will be held on Tuesday, September 28 at First Congregational United Church of Christ in Alexandria, with visitation at 10 a.m., followed by a funeral at 11 a.m. Interment will be at Zion and Saint Joseph’s Cemetery in Bertha, MN. In lieu of flowers, the family would welcome donations to Knute Nelson Foundation to support the foundation’s hospice care program.  For those unable to attend the service will be live streamed.

To order memorial trees or send flowers to the family in memory of David Westergren, please visit our flower store.
Open