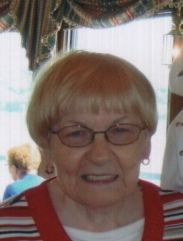 Sartell and formerly of Alexandia, MN

Darlene Mathilda Soberg was born on February 8, 1937, a twin, to Grant and Olive (Hoium) Soberg.  She was born handicapped but never let that stop her.  She was a determined, independent woman.  Her sister Wanda tried to teach her to ride bike and her twin brother, Buddy tried to teach her to drive.  Both ventures were unsuccessful but not for a lack of effort by Darlene.

She graduated from Alexandria High School in 1955 and went to Minneapolis School of Business receiving her degree.  After graduation she moved to California for a short time, returning to live in Minneapolis to begin a career with Carlson Companies on October 26, 1959.  Darlene worked in Payroll at Carlson Companies until 1970 and was promoted to several different positions during her tenure. Darlene was always willing to do any task assigned and you can be assured that the job would be done in a thorough and professional manner.

She will be remembered for her laugh and that she didn’t take herself seriously.  Darlene would also tell everyone “She was 26” -- even 56 years later.

She was preceded in death by her parents; twin brother, David (Buddy); brother -in-law, Milton.

Funeral services will be held on Monday, February 18, 2019, 1:00 PM at the Anderson Funeral Home with visitation one hour prior.  Burial will be at Evergreen Cemetery in Alexandria.

To order memorial trees or send flowers to the family in memory of Darlene Soberg, please visit our flower store.
Open