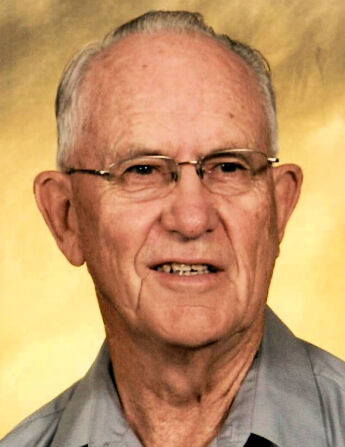 Byron “Mike” Willard Edwards was born on November 2, 1927, on a farm 5.5 miles south of Revere, MN, to Nicholas and Clara (Warner) Edwards. Mike was baptized into the Christian faith and grew up with 3 brothers and 3 sisters who gave him the nickname of “Mike”. He attended Sunny Side Double School and District 39. Later, he attended Luther Seminary in St. Paul and was the only child in his family to attend college.

Mike enlisted in the Army and served at the end of World War II from 1946 to 1948 at Las Alamos, NM. On August 24, 1951, Mike married Lucile Knutson at the church they both grew up near, Old Westbrook Lutheran Church. They were blessed with four children, Kim, Kay, Perry, and Michele. Mike served as a pastor for 36 years. Throughout this time, he served at three parishes in North Dakota; Sherwood, Roseglen, and Columbus, one in Rosholt, South Dakota, and he and his family spent 6 years in Papua New Guinea as missionaries. Prior to moving to Alexandria, the family lived in Aberdeen, SD where Mike worked for the Lutheran Brotherhood for 12 years.

Mike was a member of many service organizations throughout his life including the Lions, Rotary, and Kiwanis Clubs. He enjoyed woodworking, traveling, preaching the gospel, hunting pheasants and deer, and playing horseshoes, which he was still playing at the age of 90. Mike was a loving and devoted husband and father who cherished spending time with his family. He was faithful and caring, and made it his life’s work to serve others in any way he could.

A memorial service will be held at 2:00 PM on Saturday, October 1, 2022, at Anderson Funeral Home with visitation one hour prior to the service.

To order memorial trees or send flowers to the family in memory of Byron "Mike" Edwards, please visit our flower store.
Open