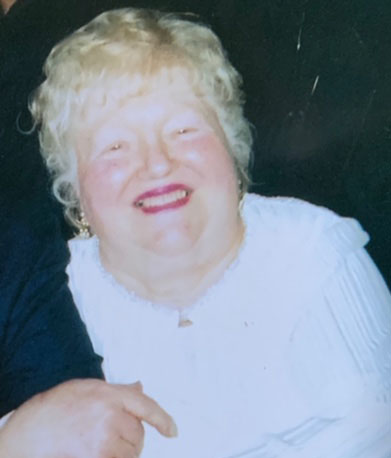 Bonnie May (Hoeper) Zinke was born July 17, 1935 to Walter Henry Conrad Hoeper & Lorena Augusta (Muller) Hoeper at the Madelia Hospital in Watonwan County, MN. Bonnie was the oldest of 4 children. Bonnie was baptized at the Zion Lutheran church in Madelia, MN in 1935. Bonnie lived in Madelia, MN and then they moved to the 10 mile corner. She attended the country school by Madelia MN. While living there she helped her dad on the farm. Then worked in a chicken factory till she got married.

Bonnie met her beloved husband of 63 years, Siebert Walter Erich Zinke at a gas station only she didn’t know it when she was 19 years old. He saw her getting tires changed on a car and he asked around until he found out who she was and where she lived, then went & asked her out. Siebert & Bonnie were united in Holy Matrimony on April 2nd, 1956 at the Lutheran Church in Lewisville, MN. She was a farm wife and had five children: Denis Zinke of rural Kensington, MN; Debra Eineke of rural Madelia, MN; Janet (Keven) Wiederholt of Farwell, MN; Beverly (George) Suchy of rural Lowry, MN; Patricia Zinke of rural Millerville, MN; and fostered a child Donald (Sue) Mews of Vining, MN . They had 17 grandchildren and 15 great-grandchildren. She is also survived by her; sister, Lucille Thorson of Montevideo, MN; brother, Dale (Grace) Hoeper of rural Madelia, MN; brother, Norman Hoeper of Arizona; sister-in-law Rhonda Hoeper; brother-in-law, Gilbert (Edith) Zinke of Lewisville, MN; sister-in-law, Elaine (Larry) Brummond rural Lewisville, MN; and many nieces and nephews.

Bonnie and Siebert after marriage lived in Lewisville where they lived for two years. Then they moved to rural Northrup on another farm for two years. After that they were in rural Holm City for nine years until they bought their present farm in 1968 where they raised their children and farmed until they passed away. When she was retirement age she worked at the pet store for 10 years with her daughter.

Bonnie loved sewing, painting, gardening, canning, cake decorating! She made all of her children their wedding cakes. She loved baking with all of her grandchildren. Bonnie took any chance she could to babysit grandchildren and great grandchildren. She liked to go grocery shopping and visiting relatives on trips.

Bonnie was a very active member of the Oscar Lake Lutheran Church since 1968. She always helped in the kitchen at the church. When there was a church supper she was knowing for bringing the biggest roster of delicious batch of scalloped potatoes and she had to bring one pie but she brought 10. Prayer was very important to Bonnie even at the end of life her faith stayed strong.

Bonnie passed away at age 84 years old on April 8th 2020 at home on the farm in Kensington, MN due to kidney failure and chronic heart disease surrounded by her loved ones with a strong faith in the Lord.

To order memorial trees or send flowers to the family in memory of Bonnie Zinke, please visit our flower store.