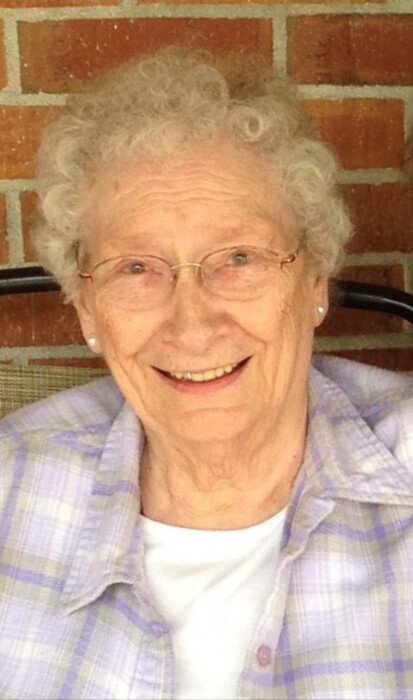 Blanche Van Kempen passed away peacefully at Glacial Ridge Hospital in Glenwood, MN, on Friday, July 8, at the age of 93.

Blanche Anastasia Bresson, daughter of Alfred and Kunda Gunda (Bertamus) Bresson, was born on September 20, 1928, in Canby, MN. She attended Yellow Medicine Country School through fourth grade before moving to Morris in 1937, where she attended country school until eighth grade. Blanche graduated from Morris High School in 1946. Following graduation, she was employed at the Dr. Johnson/Dr. Vanderhoof dental office in Morris. Blanche was united in marriage to James E. Van Kempen on September 14, 1950, at Assumption Catholic Church in Morris by Monsignor Fearon. Jim and Blanche continued to live in Morris until Jim was called back from the Naval Reserves for the Korean War; they then lived in Memphis, TN, for two years before settling back in Morris. Blanche and Jim enjoyed playing cards and dancing.

Blanche’s life was forever changed when Jim passed away from pancreatic cancer in 1969 at the age of 42. She raised their nine children on her own and was employed at Super Valu, Sunwood Inn, and McCullum Plumbing in Morris.

Blanche became involved with church activities. She served on the Altar Guild and the Prayer Chain. She also volunteered for many years at the Stevens County Historical Museum, at the West Wind Village, and with the bloodmobile until she was 89 years young. Blanche was a member of the VFW Ladies Auxiliary for over fifty years.

Blanche loved to spend time with her children, grandchildren, and great-grandchildren. Her lifelong commitment to her family was her greatest accomplishment. Playing cribbage was her specialty. Blanche also loved sports. She enjoyed watching the Minnesota Twins and Timberwolves, but she especially liked watching her grandchildren play sports and Rafael Nadal play tennis.

In 1988, Blanche sold her home and moved to Bankards Apartments for 24 years. She then moved to Heritage Apartments and later to West Central Christian Homes in Morris.

She was preceded in death by her husband, Jim; her daughter, Vicki; her son, Tom; her grandson, Jacob Van Kempen; her parents; her brother, Nick Bresson; her sisters, Florence Loher, Madeline Breckenridge, Cunda Wanningman, and Alpha (Tootie) Reed; and several nieces and nephews.

A memorial service for Blanche Van Kempen will be at Assumption Catholic Church in Morris on Saturday, July 30, at 11 a.m. with Father Jeremy Ploof officiating. A visitation will be held at the church beginning at 9:30 am prior to the service. A private burial will be at Calvary Cemetery in Morris.

In lieu of flowers, the family requests donations be made to the Stevens County Historical Museum, Morris in her memory. Cards for the family may be sent to The Family of Blanche Van Kempen, c/o Steve Van Kempen, 133 Ridge Road, Morris, MN, 56267.

To order memorial trees or send flowers to the family in memory of Blanche Van Kempen, please visit our flower store.