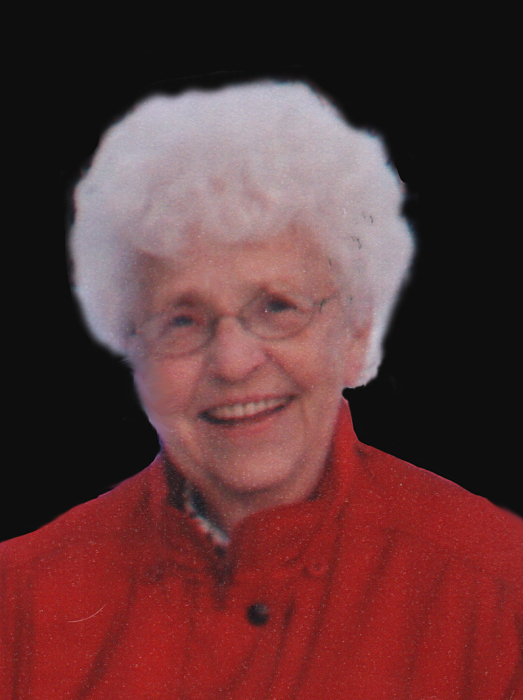 Beverly Jean Maack was welcomed into the arms of Jesus on October 26th, 2020, and reunited with her darling 5-year-old Barbara Jean, whom she has missed for 64 years.

Beverly Jean Peterson was born on December 5th, 1927, in Litchfield MN. The cherished daughter of William Donnelly Peterson and Elva Mildred (Nelson) Peterson. She was baptized and confirmed at First Lutheran Church of Grove City, MN.

Beverly was smart as a whip with a matching sense of humor. She graduated from Grove City High School at the top of her class. From there she went to the University of MN.

It was during her time at the U of M she met her lifelong love…Vern Maack.  They married on September 11th, 1948, while both were seniors.  Bev graduated with a degree in music education.

Following graduation from the U of M in 1949, Bev and Vern moved to Alexandria, MN. Bev was a substitute music teacher in District 206. She was also an accomplished piano teacher to many talented young students throughout the 50s, 60s and 70s. They built their home on the corner of 14th and Elm near the park.  This is where their children would always call home.

The first child to arrive to their home was Barbara, who grew to be a beautiful image of her daddy.  By the time Steve came along she was 3 ½ and ready to entertain her baby. Tragedy swooped into Bev and Vern’s life when they lost their darling Barbara to meningitis at age 5. A new light would shine on Bev, Vern, and Steve a year and a half later with the arrival of baby Jon.

Bev’s passion for music kept her very active in musical functions of the community and her beloved First Lutheran Church in Alexandria for over 6 decades.  Bev was an accompanist to many local celebs within and outside of the church. For many years she was a fixture at the piano in the orchestra pit for community musicals.  Bev also loved the organ and would accompany the Dist. 206 Christmas Choral Concerts. We quite by accident came across a local newspaper clipping after the 1964 concert.  It read, “…and organ accompanist, Mrs. Vernon Maack, described by Murrae Freng as ‘an absolute artist so sensitive she needs no direction.’” This would have been the pinnacle of praise to Bev, but none of us ever heard her speak of it. Our Mother believed that the piano, the music was always the star, not her.

From the time Bev was a young woman she cheered on the MN Twins, keeping tidy stats of every game each season. She was also loyal to her Vikings. As her boys grew and became involved in sports, she did too. She never missed a game and kept stats for them and also her grandchildren years later. Her sons took great pride in her “sports conversations”. Their mom knew what she was talking about.

Bev’s favorite hobbies were knitting intricately patterned sweaters and afghans which she bestowed on many loved ones.  Every day she would do the Minneapolis Star Tribune crossword puzzle start to finish.  Sometimes we would watch her work a puzzle and, like her mom, she had an airy little whistle while she worked.

In 2013 Bev and Vern sold their family home by the park. They made their new home at Grand Arbor in Alexandria.

Bev is survived by her loving husband Vern of 72 years, her devoted sons, Jon Maack of Corcoran, MN, Steve (Jana) Maack of Alexandria, her beloved Grandchildren Whitney (Micah) Savage of Minneapolis, MN, Brody (Sarah) Maack, along with Bev’s Great Grandchildren, Eli, Gus and Lola of Kindred, ND, and her brother (Roger) Nick (Gayle) Peterson of Grove City, MN, and their children. Welcoming Bev to heaven is her daughter, Barbara, her parents, and grandparents.

If you take a moment and listen very carefully, you can hear the sounds of Bach being played on the piano across the heavens. Or perhaps 2 pianos… Bach may be playing with her. Yep, that’s our Mom doing what she loved.

It is good to know that wherever you are, a mom is with you in spirit and love. One of God’s great ideas! “Everything God created is good and is to be received with thanks,” 1 Timothy 4:4. We love you Mom… and thank you God.

A private family service for Bev was held at Anderson Funeral Home. In lieu of a live streamed service, we invite you to visit www.andersonfuneral.net and watch a video celebration of Beverly Jean Maack.

To order memorial trees or send flowers to the family in memory of Beverly Maack, please visit our flower store.
Open